In thinking about the threat of terrorism facing the United States, it’s important to remember where most of the real danger comes from. Hint: It’s not immigrants, refugees, or jihadi infiltrators.

Nope, most of the danger comes from red-blooded Americans like the 24-year-old man from Pontiac, MI, who has been charged with threatening to kill the judge presiding over his child custody case. His plan involved blowing up the Oakland County Sixth Circuit Court building with a bomb modeled after the one Timothy McVeigh used to level the Murrah Federal Building in Oklahoma City in 1995, killing 168 people and wounding nearly 700.

According to the Oakland County Sheriff’s Department, the suspect indicated that he was ready and willing to “go to war” and told an acquaintance that he shared McVeigh’s anti-government ideology. Would he have followed through on his threats? It’s impossible to know, and thankfully we won’t have to find out.

But whether he was serious or just blowing smoke, the threat of right-wing terrorism is no joke. In June 2015 the Triangle Center on Terrorism and Homeland Security reported that “Law enforcement agencies in the United States consider anti-government violent extremists, not radicalized Muslims, to be the most severe threat of political violence that they face.” 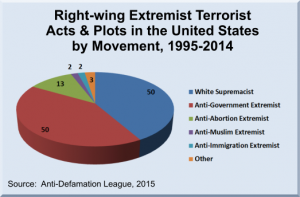 In March last year, to mark the 20th anniversary of the Oklahoma City bombing, the Anti Defamation League released a chronology of conspiracies, plots, and attacks by right-wing extremists since 1995. A total of 120 separate incidents are chronicled in the report. The graphic at right breaks down the number of attacks, plots, and attempted attacks by ideological movement.

You can download the report here. It makes for chilling reading. Here are some excerpts:

Battle Creek/Kalamazoo, Michigan, March 1998: In 1999, members of the North American Militia of southwestern Michigan were convicted on various conspiracy and weapon charges related to a terrorist plot. Prosecutors accused Bradford Metcalf, Kenneth Carter, and Randy Graham of plotting to kill federal officials, and to destroy a federal building, an IRS office, utility transmitters, and a television station. Carter pleaded guilty and agreed to cooperate with the government; he received a five‐year sentence. Metcalf received a 40‐year sentence; Graham a 55‐year sentence.

Washington County, Pennsylvania, February 2003: Ku Klux Klan leader David Wayne Hull was arrested at his home on weapons and explosives charges in connection with a plot to blow up an abortion clinic. Federal prosecutors charged Hull, the Imperial Wizard of the White Knights of the Ku Klux Klan, a small Pennsylvania‐based group, with receiving, manufacturing, possessing and transferring a destructive device in violation of the National Firearms Act. He was found guilty and sentenced to 12 years in prison in 2005.

Crockett, Tennessee, October 2008: Crockett County sheriff’s deputies arrested white supremacists Daniel Cowart and Paul Schlesselman, who were casing houses to rob in order to get funds to launch a murderous rampage primarily targeting African‐American children, which would culminate in an assassination attempt on presidential candidate Barack Obama. Both men pleaded guilty to federal weapons and conspiracy charges. Cowart was sentenced to 14 years in prison, while Schlesselman received 10 years.

Concord, North Carolina, September 2010: Anti‐abortion extremist Justin Carl Moose of Concord, North Carolina, was arrested for providing information related to the making, use, or manufacture of an explosive, destructive device, or weapon of mass destruction. According to the criminal complaint, Moose used social networking sites to advocate violence against women’s healthcare clinics and where abortions are performed, as well as their employees. Additionally, Moose allegedly met with an individual he believed was planning to bomb a North Carolina clinic and provided detailed information and instruction about various explosives and incendiary methods that could be used to destroy the clinic. Moose, a self‐ proclaimed member of “Army of God”, an extreme anti‐abortion group, pleaded guilty to distributing information on making and using explosives. He was sentenced to three years in prison.

Las Vegas, Nevada, June 2014: Husband and wife anti‐government extremists Jerad and Amanda Miller assassinated two Las Vegas police officers in June 2014, killing them while they were eating lunch at a restaurant. The couple then crossed the street to a Wal‐Mart, where they killed a civilian who attempted to intervene. Jerad died in a subsequent shootout with police. Amanda also died, killing herself at the scene after being shot by police.

I touched on this before in this space, when black churches were being burned across the South in the wake of the slaughter of black churchgoers in Charleston, SC. I bring it up (again) because it is important to remember that the main terrorist threat to America comes from within. Specifically, it comes from Americans plotting against and targeting other Americans to advance political and religious causes that are deeply rooted in American history, society, and culture.

We are our own worst enemy.