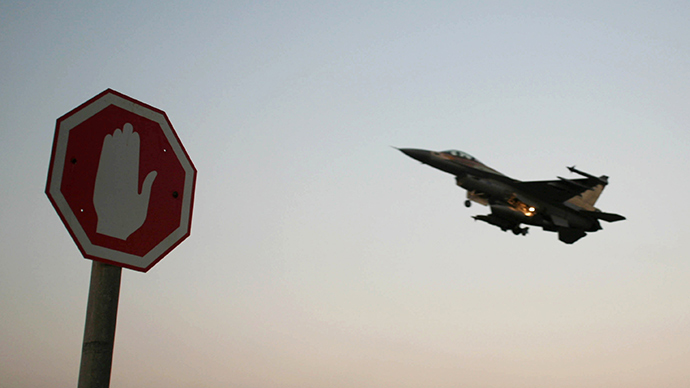 I keep telling myself that I’ll quit writing about the GOP presidential candidates and their positions on foreign policy until the race shakes out a bit. But then I read stuff like this:

Languishing at the bottom in polls of the Republican presidential field, Gov. Chris Christie of New Jersey ramped up his tough talk on foreign policy on Monday, calling President Obama a “weakling” and saying that the United States should threaten to shoot down Russian planes conducting airstrikes in Syria.

In a separate interview on Fox News, Christie was given a chance to walk the bellicosity back a bit. Instead he went to full bluster mode:

Asked whether he thought it was wise to engage in a military conflict with Russia if it breached such an American no-fly zone, Mr. Christie said it would be necessary.

“You take him down,” Mr. Christie said, referring to Russian warplanes.

Now seriously, at this point I probably have a better chance of getting elected president in 2016 than Chris Christie, but this sort of rhetoric really does matter. I tell my students that despite all appearances political candidates are rational actors, and the deliberate statements they make are typically chosen because of the candidate’s belief that the message will resonate with real and potential supporters.

The trouble with this is that this kind of tough talk from candidates, while it may make Republican voters feel better about themselves, makes for dangerously irresponsible policy from an actual president. Unfortunately we’ve known for a long time, all the way back to Bill Quandt’s research on the impact of electoral cycles on US foreign policy, that newly elected presidents do in fact try to follow through on the foreign policy positions they campaigned on.

And to be clear, Christie is not the only GOP candidate willing to risk war with Russia over Syria. Syria of all places. In a little-noticed interview last week with CNN’s John Harwood, Marco Rubio also rattled the sabers in Russia’s direction:

Rubio: “If you are going to have a no-fly zone, it has to be against anyone who would dare intrude on it, and I am confident that the United States Air Force can enforce that, including against the Russians… I believe the Russians would not test that. I don’t think it is in the Russians’ interest to engage in an armed conflict of the United States.

Harwood: You think Putin would back off if we had a no-fly zone?

Harwood: What if he was?

Rubio: Well, then you’re going to have a problem, but that would be no different than any other adversary.

Harwood: Don’t you think the prospect of potential military – hot military conflict with Russia would scare the American people?

Rubio: Sure. But the consequences of not doing anything would scare them even more and that includes its ongoing crisis of the migratory crisis that we’re now facing. The continued growth, not just of ISIS, but a Jabhat al-Nusra and other groups in the region as well. At the end of the day… We cannot say, well, if Putin is going to test us, then we can’t do anything. You’ve basically at that point ceded to him as becoming the most influential geopolitical broker in the region.”

So let this sink in for a minute. Apparently Syria is so vital to American national interest, and Putin’s intervention on behalf of the Assad regime is so dangerous, that Rubio and Christie, both vying to be the one to literally call the shots, believe it is worth going to war with Russia. Not threatening to go to war; but going to war.

For contrast, have a look at this take on the long interview President Obama gave to CBS 60 Minutes’ Steve Kroft on Sunday in which he characterized both Putin’s adventurism and Republican bluster as signs of weakness, not strength. It is worth quoting at length:

Kroft opened by noting how much the world had changed since their last interview, and what that meant for America’s influence overseas.

“A year ago when we did this interview, there was some saber-rattling between the United States and Russia on the Ukrainian border. Now it’s also going on in Syria. You said a year ago that the United States—America leads. We’re the indispensible nation. Mr. Putin seems to be challenging that leadership.”

Obama asked for clarification, and Kroft provided it. “Well, he’s moved troops into Syria, for one. He’s got people on the ground,” Kroft said. “Two, the Russians are conducting military operations in the Middle East for the first time since World War II bombing the people that we are supporting.” To which Obama replied:

“So that’s leading, Steve? Let me ask you this question. When I came into office, Ukraine was governed by a corrupt ruler who was a stooge of Mr. Putin. Syria was Russia’s only ally in the region. And today, rather than being able to count on their support and maintain the base they had in Syria, which they’ve had for a long time, Mr. Putin now is devoting his own troops, his own military, just to barely hold together by a thread his sole ally.”

In terms of perceptions of world events, there may be less daylight between Obama and Putin than Obama and his critics. Both world leaders see Moscow’s effective loss of two formerly close allies over the past two years: Ukraine to revolution, and Syria to civil war. Obama perceives Putin’s recent actions—the carving out of rump territories in Crimea and the Donbass and the bombing of U.S.-aligned rebels in Syria—as a desperate attempt to reverse a tide that’s shifting against Russian interests.

After interrupting one another, during which Kroft said that Obama’s critics argue the president is “projecting a weakness, not a strength,” Obama turned the examples against these unnamed critics, singling out his opponents within the Republican Party. The logic for U.S. intervention in Syria, he argued, previously led to the Iraq War, and its continued usage suggests that many haven’t learned the lessons of that conflict.

“[There are Republicans] who think that we should send endless numbers of troops into the Middle East, that the only measure of strength is us sending back several hundred thousand troops, that we are going to impose a peace, police the region, and—that the fact that we might have more deaths of U.S. troops, thousands of troops killed, thousands of troops injured, spend another trillion dollars, they would have no problem with that. There are people who would like to see us do that. And unless we do that, they’ll suggest we’re in retreat.”

Here Obama tries to differentiate between the reality of international relations and the perception of world events. The U.S., as Obama notes, is objectively the most powerful player in the Middle East by whatever metric one wishes to apply: diplomatic alliances, economic clout, military strength, cultural influence, and so forth. But between the spread of ISIS and a unilateral Russian intervention to save the Assad regime, it doesn’t quite feel like the U.S. is the strongest actor there anymore. For some critics, these events are an attack on U.S. “leadership,” to borrow their phraseology, and the Obama administration’s failure to respond with military force signals a lack of “strength” at best and outright “weakness” at worst.

Two issues arise. First, this thinking mirrors how Putin processes his own response to attacks on his country’s interests: A global rival’s actions threaten​ his perceived sphere of influence, and those actions must be countered with force. In Ukraine, it was the Euromaidan protests that threatened to permanently dislodge Kiev from Moscow’s orbit; in Syria, it may have been the transfer of U.S. arms to anti-Assad rebels. In response, Putin annexed Crimea last year, with disastrous implications for the Russian economy, and is now trying to save the Assad regime this year.

“[If], in fact, the only measure is for us to send another 100,000 or 200,000 troops into Syria or back into Iraq, or perhaps into Libya, or perhaps into Yemen, and our goal somehow is that we are now going to be, not just the police, but the governors of this region, that would be a bad strategy, Steve. And I think that if we make that mistake again, then shame on us.”

“I think that there are places, obviously, like Syria, that are not safer than when I came into office,” he noted, before pivoting to his multilateralist approach. “But, in terms of us protecting ourselves against terrorism, in terms of us making sure that we are strengthening our alliances, in terms of our reputation around the world, absolutely we’re stronger.”

One of these two positions — that foreign policy restraint flows from American strength, not weakness; or that restraint signals weakness and thus vulnerability — will ultimately carry the day in the real world of the next president’s foreign policies. And then we’ll see who was right.

Hopefully the costs won’t be too much to bear.