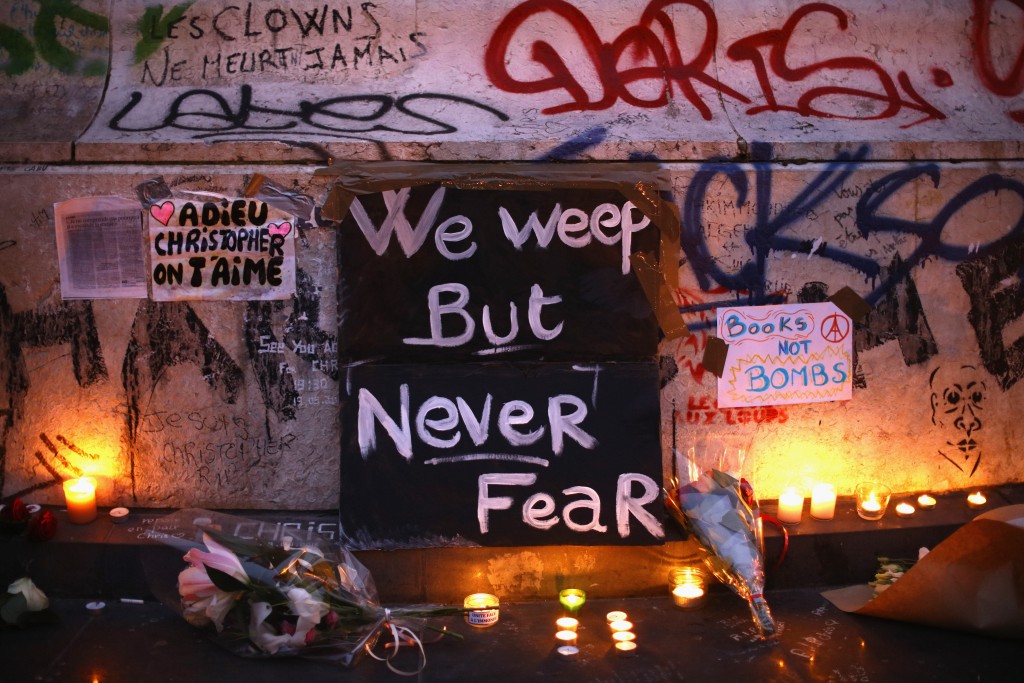 I haven’t written about Paris yet. It’s not that my training, or the expertise I’ve developed over many years of teaching about terrorism, or the research I’ve done on political violence aren’t somehow relevant. After all, I was perfectly happy to spend 15 minutes recording an interview with the local Detroit news radio station Friday evening when much of what was known was largely speculative.

I’m not alone in this reticence to blog about Paris. My friend and fellow academic blogger Steve Saideman (who I both credit and blame for encouraging me to start blogging) likewise has held back, and for many of the same reasons as I have.

I don’t have a lot to say that others haven’t said. Yes, the coordinated series of attacks in Paris represent an evolution of ISIS strategy, adding a transnational component to what has heretofore been an essentially regional campaign. It potentially represents the development of new capabilities as well. Up until this point ISIS has been content to inspire and encourage lone wolves to act in the movement’s name.

Couple Paris with the downing of a Russian airliner flying out of Egypt and we have something that looks new. Beirut not so much, given that ISIS has struck targets in neighboring states before now. But Daniel Byman of Georgetown has covered this terrain already, and the media has picked up the thread here and here. I have little to add.

The inevitable question is whether the United States could be next. The easy and obvious answer is yes. It could happen here. But that’s not a new either. No society as open as ours will be able to prevent every possible terrorist attack indefinitely.

There will be a response to the attacks in Paris, and it will be a military one. In fact strikes have already begun. France has not been shy about using force, and doing so unilaterally, against Islamist movements. It’s one reason France has been in the crosshairs of groups like ISIS and other extremist groups.

In short, I have no new wisdom to add here. And I will confess, as an academic my tendency would be to focus my thoughts and comments on all the well-worn pathways of dispassionate political and strategic analysis alluded to above.

But frankly there’s more than enough of that to go around. What is sorely lacking, and which I’m not comfortable providing, is something more emotionally meaningful, more humane, than what people like me will typically deliver.

So instead, let me give you something else. Let me leave you with the words of a friend of mine from Belfast, Colm Mac Aindreasa, who earlier today posted the following on social media:

As the dust settles and the tears flow, the atrocities of Paris, Beirut, Gaza, Syria and a raft of others brought numbing shock, followed by fear, and finally anger. On our tvs, radios and social media feeds, angry people spout hatred, and cry for bloody vengeance. And through it all runs fear. Fear and suspicion. Suspicion of strangers, fear of difference. From Francois Hollande’s calls for a pitiless response, to the most illiterate keyboard warriors and their calls for carpet-bombings, it is clear that IS has achieved its goal. Fear and distrust now rule the land.

The foul deeds of IS and others doesn’t just close borders, it closes hearts and minds as well. That persistent clicking you hear is keyboards calling for blood, guns being loaded and doors being locked as we retreat into isolation and fear. And just as the bombers intended, behind locked doors and twitching curtains our humanity withers.

Humanity can always be judged by how we treat others. And I don’t want my humanity to succumb to atrophy. So here’s what I suggest. Take your humanity out and give it some exercise. Whether your neighbours are Catholic or Protestant, Muslim or Jew, Sikh, Hindu, Buddhist, Jedi or atheist, be thankful that they give you such a rich life to live. Talk to your neighbour, don’t just hunch your shoulders and nod as you pass. Ask those around you how they are. How are their families? Offer help if you can, and encouragement if you can’t. Share a sandwich. Lend a book. Borrow a book. Help carry that heavy shopping bag. Complain about the weather. Share a joke, a smile, a laugh.

Think of this as taking your humanity to the gym. Your humanity is strengthened and reaffirmed. Your life is richer and so is your neighbour’s. That sends a clear an unequivocal message to IS and to the dark powers that created them. And the message is “You failed. I’m still human”.