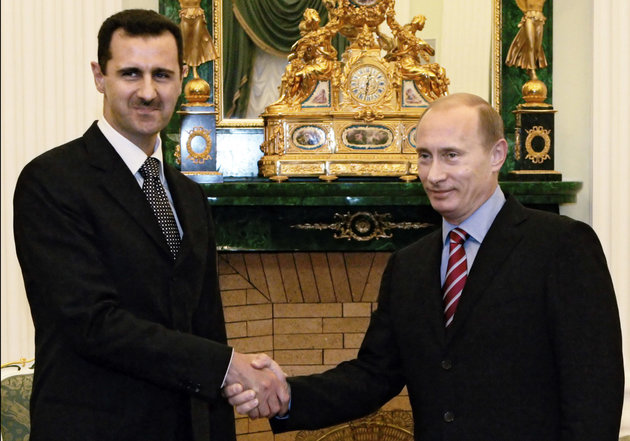 With the imminent fall of the last rebel-held enclaves in the Syrian city of Aleppo to government forces, aided by a Russian bombing campaign that has wreaked devastation on the civilians trapped there, Syrian President Bashar Assad is on the verge of scoring his greatest victory in a brutal civil war which has been raging for nearly six years.

So too is Vladimir Putin.

When Aleppo falls it will also mark the virtual extinguishing of the moderate nationalist Syrian opposition forces, who are retreating to Idlib, the last rebel-controlled city of any size, which is dominated by the Syrian branch of Al Qaeda.

Meanwhile, Assad’s forces and, more importantly their Russian allies, have largely left ISIS alone while they pound Aleppo to rubble. ISIS has taken advantage of this opportunity, recapturing the city of Palmyra and in the process grabbing up Russian rocket launchers and surface-to-air missile batteries left behind when the Russian garrison pulled out to focus its efforts elsewhere.

Russian military officials have scoffed at the idea that these weapons threaten the US-led coalition that has continued to battle ISIS while the Russian and Syrian militaries have been fighting everyone but.

In a press release, the Institute for the Study of War, which has been tracking the fight for Aleppo from the beginning, succinctly summarizes the implications of the endgame we now seeing unfold:

Eastern Aleppo’s imminent fall – to a coalition that includes Russia and Iran and its various proxies – will accelerate the war’s destabilizing effects. Jihadists will further improve their position within the Syrian opposition. Fighters aligned with Syrian President Bashar al-Assad will continue committing atrocities against civilians. The United States, its allies, and its international partners must now confront this new, yet predictable, phase in the Syrian war.

This is the natural result of a strategy that I first wrote about back in early October 2015, right after Russia began launching airstrikes in support of the Syrian military. From the beginning it was clear that Russian Pres. Vladimir Putin’s strategy was to clear the field of the “moderate” rebels, turning the civil war into a showdown between Assad and ISIS.

As I wrote back then, assuming the strategy works, it presents the rest of the world, and the United States in particular, with the impossible choice of backing Russia’s longtime ally or seeing the country fall to the Islamic State:

With President Obama committed to defeating ISIS, and, crucially, seeing Assad removed from power, there was still the possibility of a different outcome, no matter how unlikely it seemed on the ground.

But with Donald Trump in the White House? Assad expects a transformed relationship between Syria, under his leadership, and Washington. Don’t take my word for it though. Take it from Assad himself:

Trump’s statements were clear during his campaign in relation to fighting terrorism, non-intervention against states in order to depose governments, as the United States has been doing for decades. This is good, but this depends on Trump’s will to carry on with this approach, and his ability to do that.

We know that there are powerful lobbies in the United States which stood against Trump and they will exert their utmost pressure, when he is in office, to push him towards retracting what he said in this area and in other areas as well. Otherwise, he will have a confrontation with these lobbies in the Congress, in the Senate, in the media, and in the industrial lobbies which gain from wars, like what happened in Iraq and Yemen recently.

That’s why if Trump was able to overcome all these obstacles and really act against terrorism, I believe that he will be our natural ally and your natural ally.

If Assad is right, a Trump presidency will contribute not just to his victory in Syria, but to Russia’s as well. No wonder Putin wanted him to win the election.