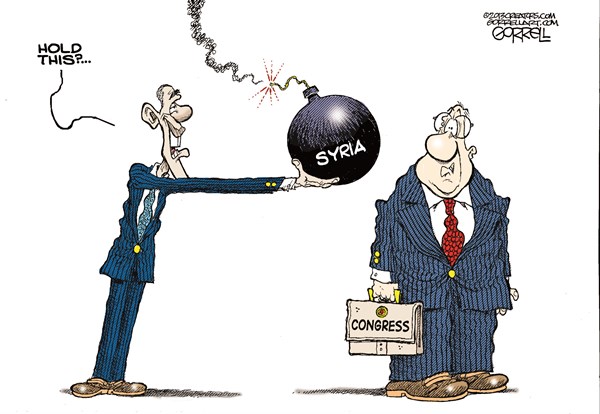 Last week President Obama announced that US Special Forces would be deployed to northern Syria to aid Kurdish fighters battling ISIS. This puts American “boots on the ground” (albeit a very small number) to compliment the ongoing air campaign that the US began waging against the Islamic State in August 2014, first in Iraq and now Syria.

Wait just one minute, I hear you saying. Under what authority is Obama getting the US deeper and deeper into the Syrian quagmire? That’s easy, says White House spokesman Josh Earnest:

Congress in 2001 did give the executive branch authorization to take this action, and there’s no debating that.

Hold on, hold on! That was just to give George W. Bush the authority to take out Al Qaeda and punish those that enabled the attacks of Sept. 11. What’s that got to do with ISIS?

SEC. 2. AUTHORIZATION FOR USE OF UNITED STATES ARMED FORCES.

The White House argues that this gives them all the authority they need. And here’s why:

What Congress gives, though, theoretically, Congress could take away. Actually it’s not a theory at all. Congress has the power to entertain a new authorization specifically focused on the use of military force in Syria against ISIS. If you argued that Congress has a constitutional responsibility to take up such a measure I’d be the last to contradict you. In fact Obama asked Congress for just such an authorization back in February. You can read the proposed text here.

AS CNN reported, congressional leaders were quick to criticize yet unwilling to act. House Republicans simply dismissed the proposed authorization as, wait for it, too limited:

“If we are going to defeat this enemy, we need a comprehensive military strategy and a robust authorization, not one that limits our options,” House Speaker John Boehner said in a statement … “Any authorization for the use of military force must give our military commanders the flexibility and authorities they need to succeed and protect our people … I have concerns that the president’s request does not meet this standard.”

And so that’s where it sits, even as new developments in Syria prompt some members, like Sen. Tim Kaine (D-VA), to call on Congress to rein in Obama:

We’re setting an absolutely horrible precedent that this body will come to regret with respect to handing over the ability for a president to wage a war carte blanche without a vote.

But the reality is that Congress won’t. Bob Corker (R-TN), chairman of the Senate Foreign Relations Committee told NPR this week that not only does he agree with the administration’s position, but that debate would reveal division when the country needs to project unity in the fight against ISIS:

As I’ve said from the beginning, I believe the administration has the authorities to do what they’re doing against ISIS. … So to enter into a debate when you don’t see a pathway forward that may appear to show disagreement over countering ISIS to me does not seem like a prudent course of action to take, especially when, like me, I believe they have authority anyway.

The bottom line is that Congress sees no up side for itself either in signing off on any use force against ISIS or in actively reining in the president. If it goes badly, Congress can lay all the blame squarely at the president’s feet. But if they approve it, they share ownership. If Congress blocks escalation against ISIS and that turns out to be a strategic and humanitarian disaster, then they’re on the hook for preventing Obama from acting decisively. But by doing nothing Congress can sit back and throw bricks at the president and his Syria policy without taking any responsibility for it. Some might argue that’s a win.

Dick Durbin of Illinois, the second-ranking Democrat in the Senate sums it up this way:

Many members of Congress want it both ways. They want to criticize the president, but they don’t want to have it on their conscience or their shoulders that they authorized it.

So thanks but no thanks. Constitution be damned. President Obama, take the ball and run just as far as you want. We’ll see you on the other side.