Easter is the time in the Irish Republican calendar when the failed 1916 Rising is remembered and the long armed struggle against British occupation of Ireland is commemorated. I’ve written about these commemorations and their politicization in Northern Ireland before, here, and here, and here.

So it should come as no surprise that the armed Republican dissident group commonly called the New IRA yesterday plastered their Easter message on walls across nationalist neighborhoods in the city of Derry. The document is an excellent example of the kind of messaging that many armed political groups routinely engage in as they seek to justify their actions, deflect responsibility, and rally support for their cause. Let me elaborate.

In this first passage, the New IRA lays the blame for any armed conflict squarely at the feet of the British government and those who work to enforce British rule in Northern Ireland. And they make the argument that force is necessary to move the needle toward the goal of ending British occupation.

Responsibility for the ongoing conflict rests firmly on the shoulders of the British Government. While British occupation persists particularly throughout those who implement its policies via Stormont, the Irish people are denied their right to national self-determination and sovereignty. Faced with this reality we remain committed to bringing the British government’s undemocratic rule of the occupied part of our country to an end.

While we face an unprecedented health crisis, it won’t be long until Brexit and it’s continuing difficulties for Britain re-emerges. This has reinvigorated the topic of a reunified Ireland. Revisionist agendas and former Republicans turned British politicos endorsing a Border poll will not force the hand of the British establishment. They listen to one thing and one thing only: physical force.

In this next section, the New IRA makes claims about its capability to strike and its willingness to do so. At the same time they warn the public to stay away from “Crown Force,” i.e. police, vehicles in order to avoid becoming collateral damage. This is a clear reference to the killing last April of freelance journalist Lyra McKee, who was fatally shot as she stood next to an armored police vehicle while observing a riot in Derry.

Despite an increased Crown Force presence and a restocked war chest, we have demonstrated again and again that we retain the capacity and resources to continue to strike against those maintaining British occupation. Everyone should be assured that we are united, we are strong and we remain steadfast in our determination to achieve our objectives.

We have repeated often in the past and do so again now; the IRA can strike at will. We warn the public to be aware of this and to remain a safe stance from Crown Force vehicles at all time.

The message of this is obvious: The New IRA will take no responsibility for any civilian casualties that might occur during an attack on the police. That blame they will lay at the feet of the police first, and then the innocent victims themselves.

And now on to this week’s look back at the week in terrorism history. 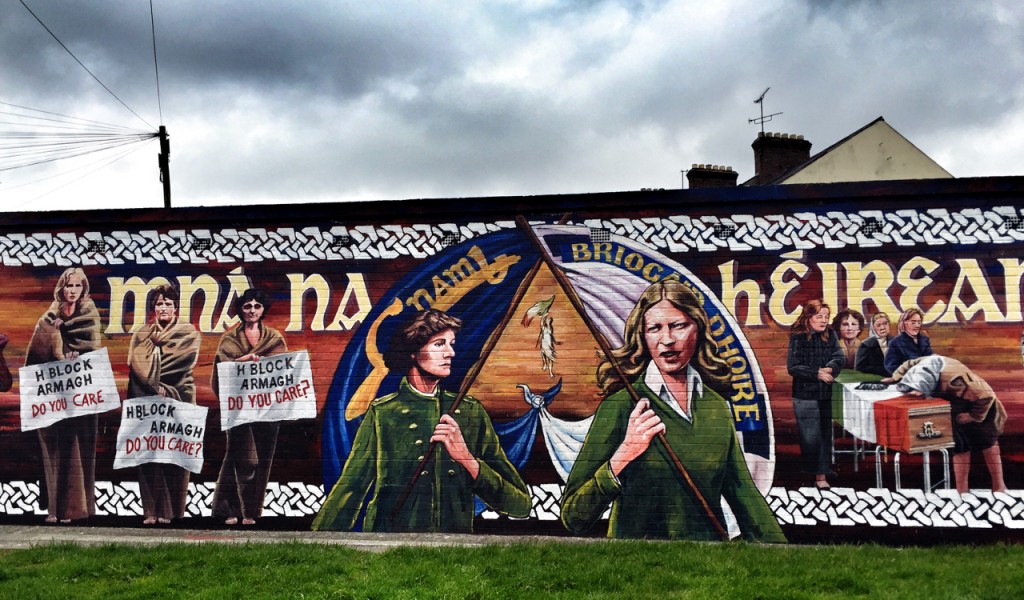 Walking around Bogside this morning, Sarah and I spotted the above mural in the neighborhood up the street from the more celebrated murals of Derry’s People’s Gallery. Up we went to take a look and take a few pictures.

As you can see, the mural celebrates and honors the contribution made by women to the Republican struggle, whether under arms, in the prisons, or in the community. It occurred to me in thinking about it that this represents another gap in my research, and thus in my understanding, of what has gone on here in the past and what the future might hold.  For all the trips I’ve made here over the years, I have interviewed precious few women.

This is not all that different from the other gaps I have mentioned before on the blog. Before this trip I had spent very little time outside of Belfast. That has now changed, and will change further next week when I get out of town again for another round of interviews. Before this trip I had very little contact with working class Loyalists and former Loyalist paramilitaries. That too has changed.

This newly recognized gap in my work is, at least to my mind, understandable though obviously not desirable.  My field research unfolds through contacts and intermediaries. I meet someone, or interview someone, and then I ask them to give me the names of other people they think it might be good for me to talk to or to make an introduction on my behalf.  Without exception, all of the contacts that I have made this way have been with men.

I’m not quite sure how to change the dynamic. For this trip it is probably too late. Clearly I am going to have to be more proactive in seeking out women’s voices the next time I am here doing field work. Maybe I’ll get lucky in the last week of the trip, but barring that, I’ve got some work to do for next time.