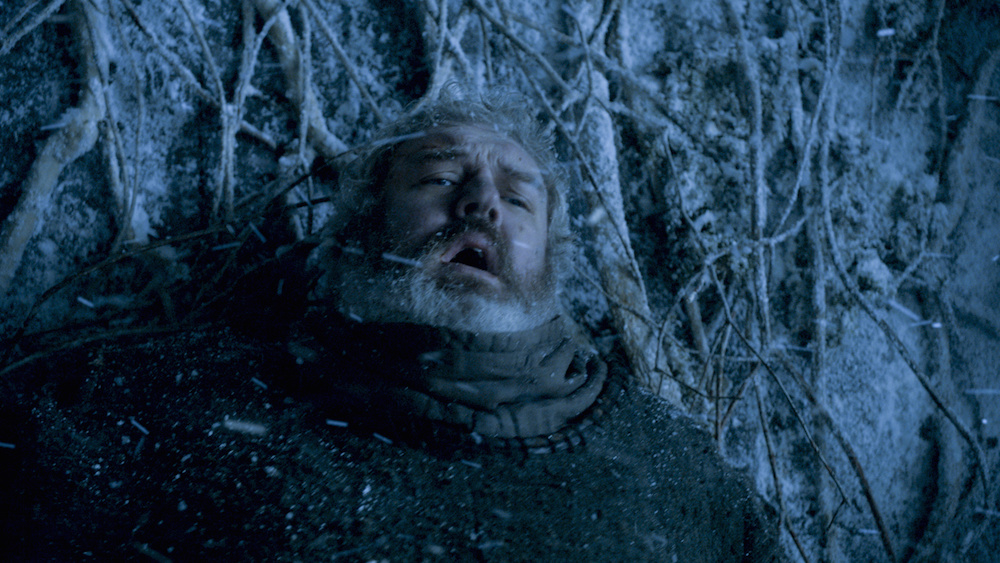 Seriously, if you read the title of this post you should have already guessed that spoilers abound. Fair warning.

There was one noble act of self-sacrifice in last night’s Game of Thrones episode, but it wasn’t Hodor.

No, that belonged to Leaf, who took a whole bunch of wights down with her when she detonated her Holy Handgrenade of the Children of the Forest.

No, Hodor was sacrificed all right, but it wasn’t a death he chose for himself.

Nope. Bran killed him, just as sure as if he’d thrust a dagger into the gentle giant’s giant heart. Of course this runs counter to some of the Internet’s prevailing day-after narrative. Take this passage from a piece at The Atlantic:

The most striking instance of all that was, of course, the straining, clawing, and self-sacrificial death of Hodor.

Or this from Slate:

On Game of Thrones, death is sudden. It is cruel and stupid, brutal and inevitable. But it has never been as heartbreaking as it was at the end of “The Door,” when the taciturn giant, Hodor (Kristin Nairn), gave his life so that Bran and Meera might escape. George R.R. Martin doesn’t traffic in heroism, but if any character’s end qualifies as heroic, this one did.

Even the actors and showrunners themselves put this perspective forward in the after-episode commentary provided by HBO:

Pay attention to what Kristian Nairn, who plays poor doomed Hodor, has to say in the clip. “I like that he sacrifices himself for his friends. It’s very true to Hodor for me.” But he’s wrong. They’re all wrong.

At the moment when Hodor makes that decision, he’s not the one making that decision. Bran is. Hodor had been frozen in terror, useless as the White Walkers and wights were overrunning the cave where Bran, Meera, the Three-Eyed Raven, Leaf, and the other Children of the Forest were hiding.

And then Bran warged into him.

As we learned in earlier episodes, and certainly from the books (for crying out loud, read the books), when Bran wargs into another creature he shares its mind and controls its actions. This is true whether we are talking about Summer, Bran’s doomed dire wolf, or about Hodor himself.

Once Bran enters his mind, Hodor is nothing more than a puppet. A huge, powerful puppet.

This also explains how Wylis becomes Hodor. When time-traveling Bran wargs into the stableboy, he’s already mentally connected to Hodor, and becomes the bridge between past-Wylis and present/future-Hodor, allowing the later’s traumatic, horrific death to shatter the former’s mind.

Of course this is all completely in keeping with the world of Game of Thrones, in which death is more often ignominious and pointless than it is noble. Ask Ned and Robb Stark, or King Joffrey, or Robert and Renly Baratheon, or Tywin Lannister. Or The Hound. Or Oberyn Martel. Or … take your pick.

It’s also a world in which the powerless die to advance the agendas of the powerful. And so Hodor joins the ranks of countless others, named and unnamed: Old Nan, Osha the Wildling, Shireen, Ollie, the shepherd’s boys, civilians and soldiers and men-at-arms without number.

But at least Slate got it right when they named Bran this week’s “worst person in Westeros.” It’s just not for the right reason.