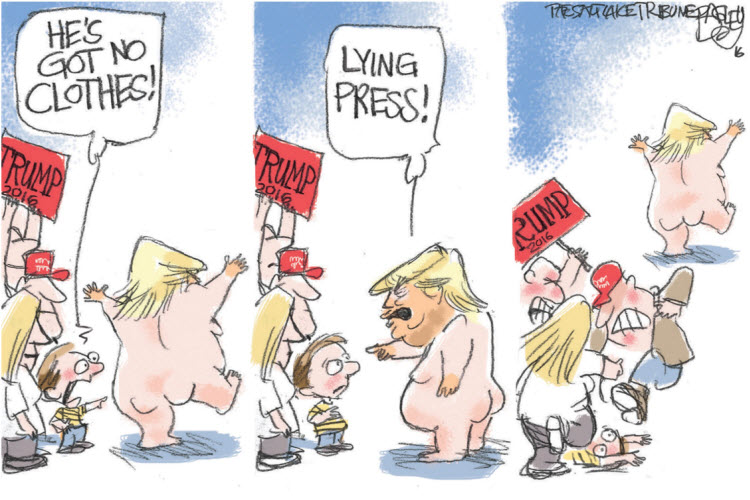 The relationship has always been a little, shall we say, loose.

The president, though, is in good company, just perhaps the latest and most brazen liar to rise to a position of power and authority. Certainly not the first.

But although the devil be the father of lies, he seems, like other great inventors, to have lost much of his reputation, by the continual improvements that have been made upon him. Who first reduced lying into an art, and adapted it to politics, is not so clear from history, although I have made some diligent inquiries.

Falsehood flies, and truth comes limping after it, so that when men come to be undeceived, it is too late; the jest is over, and the tale hath had its effect: like a man, who hath thought of a good repartee when the discourse is changed, or the company parted; or like a physician, who hath found out an infallible medicine, after the patient is dead.

I came across the above quote from Swift in an article at The Atlantic, which asks a simple, but critical question: Who can tell the emperor when he has no clothes? The full piece, by Yoni Applebaum, is well worth the read. Here’s a sample:

The trouble for Trump is that, sooner or later, the truth catches up. As a real-estate developer, he could simply skip 10 floors in a building, and announce it stood 68 stories tall. As an entertainer, he could rely on the selectively edited reality of television. His audiences would willfully suspend their disbelief. “People want to believe that something is the biggest and the greatest and the most spectacular,” he wrote in Art of the Deal. “I call it truthful hyperbole.” And that insight helped him succeed as a candidate, too.

Take a few minutes and read the whole thing.