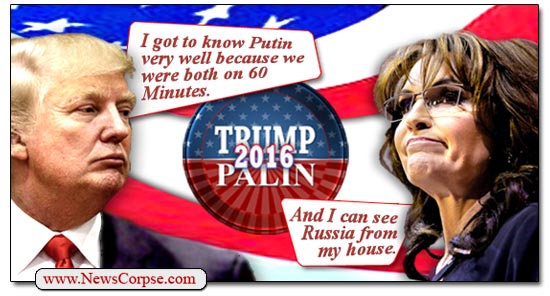 Conor Friederdsorf, who’s usually pretty level-headed, has a remarkably off-target piece over at The Atlantic today in which he suggests that Sarah Palin has rethought her commitment to neoconservative foreign policy and ditched it in favor of the still-muscular but restrained (in foreign policy terms) sensibilities of Donald Trump (whom she endorsed to much fanfare yesterday) and Rand Paul. Palin, he writes:

has always been an interventionist hawk. Bill Kristol played a part in her rise. Matthew Continetti defended her at book length. If the Tea Party runs the gamut from non-interventionist Rand Paul to on-the-fence Ted Cruz to neoconservative Marco Rubio, Palin once aligned most closely with a Rubio-style foreign policy. It’s why an otherwise uncomfortable political marriage with McCain could work.

What’s the fundamental flaw in this take on Palin? It proceeds from an assumption that Palin ever had any semblance of a coherent foreign policy thought in her head that didn’t stem from her desire to boost her own profile. To his credit, Friedersdorf recognizes this may be behind her apparent change in approach:

One theory is that Palin never had any real foreign-policy convictions. She allied with George W. Bush when it was popular to do so in her party, adopted John McCain’s attitude when it was politically advantageous, and is changing again now that her most likely path to political relevance lies within a Trump Administration.

Too bad he dismisses the idea a paragraph later, offering the alternative theory that she has changed her stripes because foreign policy was never a priority for her.  Ultimately, he writes, it doesn’t matter because Palin’s break with the neocons is what’s really significant. And thus this:

Going forward, it will be fascinating to see what Palin says about foreign policy, especially if Trump squares off against Hillary Clinton, with her neocon proclivities.

No, you know, not really. It won’t be fascinating at all except in the way that a multi-car pileup is fascinating as you rubberneck your way past on the freeway.

The truth is, Bill Kristol and the other neocons weren’t drawn to Palin by her ideas, but by her story, her frontier image, and above all, by her looks. The shallowness of Palin’s rise to national prominence is nicely captured in this October 2008 piece from The New Yorker.

And now she’s back. Once again she’s basking in the glow of attention from media and pundits. Once again, we’re falling for the con.