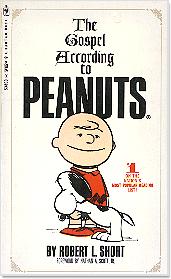 My introduction to the idea that we could get more out of pop culture than simple entertainment or a quick laugh came from the bookshelves that lined the walls of my family’s living room when I was a kid. There, tucked in alongside some of my father’s books on theology and biblical commentaries was The Gospel According to Peanuts.

This best-seller was published in 1965 by Robert Short, a Presbyterian minister, and was followed up a few years later with The Parables of Peanuts. What both of these books did, and why my father, an Episcopal priest, had them in his library, was to offer a modern guide to Christian faith as taught through the lessons of Charles Schulz’s beloved cartoons.

I was reminded of this today by an article by Jonathan Merritt at The Atlantic on the intentional spirituality at the heart of Charles Schulz’s work:

Schulz … revolutionized his industry by using his strip to subtly raise religious questions about the Bible, prayer, the nature of God, and the end of the world. Schulz was a devoted Christian; unshell the Peanuts and you’ll find the fingerprints of his faith. By mixing Snoopy with spirituality, he made his readers laugh while inviting them into a depth of conversation uncommon to the funny pages.

The beauty of Schulz’s approach was the soft touch, rather than the heavy hand, with which he used his cartoons as a vehicle to express the depth of his Christian faith. He was no raging evangelical firebrand, even when his characters directly quote from scripture. The joke was still the point, just not the only point:

“You can grind out daily gags, but I’m not interested in simply doing gags,” Schulz would say. “I’m interested in doing a strip that says something and makes some comment on the important things in life.”

Even when — perhaps especially when — he wasn’t quoting scripture, Schulz’s work was often using allusions that would strike a chord both with believers who would likely pick up the reference readily, as well as those who missed the reference but got the point anyway.

A famous example, as Merritt’s article explains, was published in 1959 and seen at right (click the image to enlarge), in which Linus builds an elaborate sandcastle only to have it washed away by the rain. While many readers would probably catch the reference to the Gospel of Matthew and Jesus’ parable about the man who built his house on sand, the universality of the sentiment has far broader appeal than to just biblically literate Christians.

As Merritt’s article points out, Schulz never stayed locked in a 1950s-era expression of Christianity. As his own faith evolved, and as he began to wrestle with challenging questions in his own spiritual journey, that questioning and puzzlement had their reflection in the comic strip:

This mixture of hope and skepticism reflects Schulz’s own evolving faith, which came to assume an increasingly central role in his work. When you map religious references in Peanuts over time, the trend line shoots up and to the right.

I’ve long believed that we can look to popular culture, whether comics, or TV shows, or film, to illumine important truths about important topics. That’s the impulse behind my use of movies in the classroom to encourage my university students wrestle with challenging questions related to conflict, identity, ethics, and politics. It’s a lesson I hope my students remember long after they leave my classroom.

But it’s a lesson I first learned from Charles Schulz, Robert Short, and my dad.