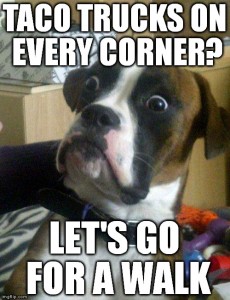 The race for the White House is over. A Clinton landslide is now a foregone conclusion.

The man we have to thank for that is Marco Gutierrez, founder of Latinos for Trump, who in an interview on MSNBC last night made a dire prediction for the future.

Gutierrez warned that unless Donald Trump were elected president, America would wake up one day to find “taco trucks on every corner.” Based on the memes that flooded my news feeds this morning, to say that this caused a ripple on social media might be an understatement.

NPR has some of the the highlights.

Check out the threat for yourself:

As Politico reported, this comes on the heels of the implosion of what little Hispanic support Trump had following his brief visit to Mexico and hardline speech on immigration in Arizona.

I don’t know about you, but after this, November 8 can’t come soon enough. I welcome the arrival of our taco overlords.