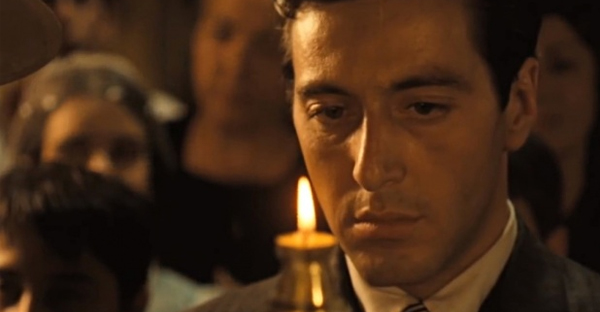 Note — This post is by Nicholas Drabant, a freshman in the Honors College at Oakland University majoring in Creative Writing. Students in my course, International Relations on Film, are  contributing posts to the blog reflecting on the movies we are watching in class and the ideas those films are helping us to think about. Nick’s piece is presented here with minor editing.

Let’s not beat around the bush, Francis Ford Coppola and Mario Puzo’s The Godfather is one of the most well known and respected films ever made, period. This is true for a number of reasons: the haunting score, the over-the-top violence, the well done cinematography, Marlon Brando’s voice, and so on and so forth. The film is so deeply ingrained in popular culture that even people who haven’t seen the movie can more than likely quote the infamous line, “I’m gonna make him an offer he can’t refuse” while petting an imaginary cat for dramatic effect.

But one of the major reasons for The Godfather’s seemingly immortal existence within popular culture, outside Don Corleone’s famous quote, is how, despite it being a period piece about a New York crime family in the late 1940s and early ’50s, the tensions and conflicts that exist between the film’s feuding gangsters can easily be seen as a mirror reflecting the tensions and conflicts  existing in America and abroad today, threatening to boil over tomorrow.

That being said, however, The Godfather also depicts ways to deal with threats and/or challenges to America, through the use of force. In a still influential 1980 article on the uses of military power, political scientist Robert J. Art argued that the political functions of force could be boiled down to four categories: swaggering, compellence, deterrence, and defence.

With that being said, let’s discuss the different types of force and their roles in both the movie and in modern day America.

And I will warn you, if you haven’t seen The Godfather, this will contain references to major plot points in the movie, and may ruin the experience. Please, watch it first – it deserves the watch.

Now swaggering is the hardest to explain but pretty easy to pull off. Essentially, swaggering is showing off that you have the power to do something forceful for purposes of pride, or prestige, or just to make someone afraid of you. It isn’t necessarily meant to change another’s ideas or behavior, just to scare someone to show off. There’s not much to it, outside of actually having the power to back up the swaggering, which – if a stockpile of nuclear weapons says anything – America has.

In the opening scene of The Godfather, we’re introduced to an undertaker describing an attack on his daughter by two men to Don Corleone and begging for justice on her behalf. But the Don initially refuses him, criticizing him for showing disrespect by asking him to commit murder when murder is not warranted and for refusing the Don’s friendship in the past. The undertaker immediately apologizes, kissing The Godfather’s hand, and promises to provide a service to the family in the future, should the need arise.

Satisfied, Don Corleone agrees to take care of the problem. By watching the undertaker, it’s obvious that he is completely intimidated by Don Corleone. The swaggering has been effective. Not only has the Don secured a future ally, his prestige has been acknowledged by recognition of how much influence he can easily swing around.

Compellence, however, is equally difficult to explain as it is to pull off – however, when achieved, it is extremely effective. Essentially, compellence is using force to make a target alter their plans. It is basically making a threat and then carrying it out if you must to make the opponent comply. But this can be difficult to pull off, as, in order to successfully use compelling force, one have to know what your target fears and what he teasures, and the target has to know what to do to prevent or make the punishment stop.

This is where the famous line, “I’m gonna make him an offer he can’t refuse,” is most applicable.

The chief example of compellence comes in one of The Godfather’s most shocking scenes. After being denied a movie role by the head of Woltz studios, Don Corleone’s godson, crooner Johnny Fontane, comes to the Don to beg for his help in persuading Woltz to change his mind. Don Corleone sends the family consigliere, his adopted son Tom Hagan, to California to sort things out. Tom visits Woltz in his mansion, where the studio exec shows off his estate and his wealth, including a prized racing horse, then at dinner confirms there is nothing that will make him cast Johnny in the movie. And he tells Tom to tell that to Don Corleone.

Tom leaves the mansion having delivered his message of what The Godfather wants, with the knowledge of what the director holds dear. The family has the perfect opportunity to use compellent force, and it does. Woltz awakes in his gold-sheeted bed to find it stained with blood. Lifting the covers off of him, he finds the severed head of his prized race horse. Johnny gets the role not long after.

Deterrence is fairly simple. It’s a threat, a warning that if you do this, this will happen. The issue with pulling it off, however, is that the person has to believe that you will follow through on the threat – not exactly that you can, but they believe you could. If a country like the United States announces that doing thing A will cause them to declare open war on you, most countries would avoid doing thing A.

In The Godfather, deterrence is actively shown after the failed assassination of Don Corleone. Michael comes to check on him in the hospital and finds that the guards that should be placed outside of the Don’s room are gone. Fearing an attack on his father’s life at any moment, Michael convinces a nurse to move his father into a different room to hide him.

Michael and Enzo, a baker who had come to the hospital with flowers for the Don in a show of gratitude, station themselves on the front steps of the hospital. With no actual weapons, and backup from the Corleone family an unknown distance away, Michael tells Enzo to put his hand in his pocket “as if you have a gun.” Michael does the same. Within moments, a dark car full of men slows and pulls to a stop in front of the hospital, the passengers cautiously eyeing the two men on the steps. Michael reaches further into his jacket, as if going for a weapon. Without another word, the car speeds off.

Michael and Enzo, as the audience knows, are unarmed. But the men in the car did not know this. And that’s the beauty of a deterrent – the possibility is of violence is as threatening as the reality, which is why it works. Nobody would dare risk attacking a guarded Don Corleone – especially if there are more gunmen inside the hospital.

The final use of force is defense, primarily preemptive defense. Preemptive defense comes into play when you believe there is immediate threat and must take it out as quickly as possible in order to be safe.

Anyone who’s seen The Godfather knows where this is going. At the very end of the movie, Don Corleone dies of a heart attack and Michael succeeds him as Godfather. Don Corleone, however, leaves his son with some advice before he passes: that his enemies in the other crime families will move against him, and that the signal will be an attempted betrayal by someone trusted, someone close to the family.

When the betrayal comes, Michael knows he must act. Fearing that the looming attack would kill him and lead to the destruction of the Corleone family, the new Don takes the only option possible: preemptive bloodshed. Michael orchestrates the successful assassination of the heads of every other crime family, hitting them before they could hit him. The movie ends with the door closing on Michael in the room where his father conducted his business, having secured the family’s position as the most powerful crime family.

The use of force for political reasons is a dangerous decision to make. It is far beyond my judgement as a student to say that I, unequivocally, know which path the United States should take when dealing with issues on an international level. Whether the issue of possible nuclear weapons in Iran or the Syrian civil war call for deterrence or compellence is a more fitting question for a political science major than a creative writer.

The lesson of The Godfather, perhaps, is that used properly, each of these methods of use of force can be just as effective as the other – it just requires the right timing, and the right voice to pull it off – to make offers that cannot be refused.