I’ve been watching Hulu’s masterful adaptation of Margaret Atwood’s “The Handmaid’s Tale,” wanting to write about it, but trying to avoid what I believe to be the smugly too-easy commentary that suggests that the election of Donald Trump is an obvious first step down the path to Atwood’s dystopian future America. 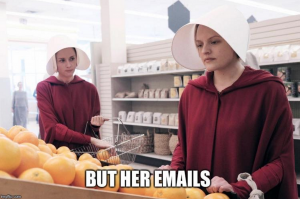 The kind of funny but ultimately misleading sentiment like that expressed in this meme (which I will admit to posting on social media myself when I first saw it).

As Atwood herself wrote in March for the New York Times, she began work on “The Handmaid’s Tale” while living in West Berlin, and with the understanding borne of personal experience, that “established orders could vanish overnight,” that “it can’t happen here” can happen anywhere.

Given this, it was essential to Atwood that the future she imagined be rooted in the reality of the past and present:

One of my rules was that I would not put any events into the book that had not already happened in what James Joyce called the “nightmare” of history, nor any technology not already available. No imaginary gizmos, no imaginary laws, no imaginary atrocities. God is in the details, they say. So is the Devil.

This, I think, is one of the great strengths of the Hulu adaptation. Atwood’s dystopia, which Hulu brings to the screen, may be an imagined American future even as it is a present-day reality in those places where radical interpretations of religious dogma are twisted into brutal governing principles.

That was driven home to me by a single scene from the third episode of the series. A still from that scene appears here at the top of the page. A woman, having been convicted of an act prohibited by scripture, is hung from a construction crane by black-clad religious enforcers. Exactly the same way public executions are done in Iran. Exactly, as you can see below.

This, I think, is the real power of Hulu’s adaptation. We can imagine the society it depicts because we have real-world examples, right now, of what such societies look like.

Still, we’ve had the false comfort of telling ourselves that regimes like this are the product of an alien belief system. We can read about the terrors of life under the control of the Islamic State but pretend that our own majority religious heritage would never generate such horror.

But Atwood knew when she was writing what dark currents flow just below the surface of American society:

Back in 1984, the main premise seemed — even to me — fairly outrageous. Would I be able to persuade readers that the United States had suffered a coup that had transformed an erstwhile liberal democracy into a literal-minded theocratic dictatorship? In the book, the Constitution and Congress are no longer: The Republic of Gilead is built on a foundation of the 17th-century Puritan roots that have always lain beneath the modern-day America we thought we knew.

Yet “The Handmaid’s Tale” is no prediction. It is a warning we do well to heed.

Is “The Handmaid’s Tale” a prediction? That is the third question I’m asked — increasingly, as forces within American society seize power and enact decrees that embody what they were saying they wanted to do, even back in 1984, when I was writing the novel. No, it isn’t a prediction, because predicting the future isn’t really possible: There are too many variables and unforeseen possibilities. Let’s say it’s an antiprediction: If this future can be described in detail, maybe it won’t happen. But such wishful thinking cannot be depended on either.