Note — This post is by Caitlyn Ulery, a student in the Honors College at Oakland University and a freshman majoring in English. Over the next few months, students in my course, International Relations on Film, will be contributing posts to the blog reflecting on the movies we are watching in class and the ideas those films are helping us to think about. Caitlyn’s piece is presented here with only minor editing.

In 1648, The Thirty Years War in Europe came to an end with the signing of a series of peace treaties, known at the Peace of Westphalia. The Peace of Westphalia was crucial in shaping the rest of Western history, as it ended control by the Roman Catholic Church and the Holy Roman Empire over the European states.

This shift in sovereignty, or supreme power, now gave European rulers the rights to full control over their states. Each state was free to be governed only by itself, and no state was to interfere with this right, unless there was just cause to revoke the power of another state’s ruler through war. Western Europe became a system of sovereign states, but to whom did this sovereignty apply?

Roland Joffe’s 1986 film The Mission does a wonderful job of addressing the idea of sovereignty. Based on the events surrounding the 1750 Treaty of Madrid, Jeremy Irons portrays a Jesuit priest, Father Gabriel, working to convert Paraguay’s Guarani people to Christianity. When Portugal decides they would rather have slaves than a mission in the territory they received from Spain, Father John (Liam Neeson) and convert Rodrigo Mendoza (Robert De Niro) fight with the Guarani people to protect the newest Jesuit mission. 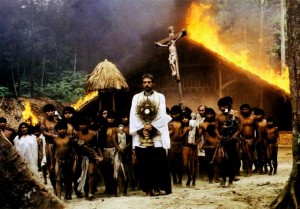 Father Gabriel prays and sings hymns with the natives, determined to resist the Portuguese assault peacefully with the grace of his God. In a cunning battle full of gallantry and heartache, the mission is razed to the ground, and the three Jesuits die tragically with nearly all of the Guarani people.

Throughout the film, the events are relayed in a letter being written by Cardinal Altamirano (Ray McAnally) to his superior. McAnally’s character embodies the shift in the European authority structure. Though he is in Paraguay to assess the Jesuit missions and to advise the Portuguese king on what he should do about the missions, the cardinal holds no real power.

Before the Peace of Westphalia, the cardinal could have had the power to preserve the missions in Paraguay. At the time of these events, however, the Church was forced to answer to the European states. The European rulers possessed sovereignty, not the Church. During a meeting with the Guarani people, the cardinal explains that the king of Portugal will not listen to his advice, and the leader of the Guarani declares that he is also a king, and will also not listen.

This is where the flaws in sovereignty are revealed. By modern definition, it is the absolute right of a state to govern itself without outside interference. A more knowledgeable understanding of sovereignty would reveal that sovereignty allows for interference for just causes, such as a tyrannical leadership that oppressed and harmed its people.

As demonstrated by The Mission, sovereignty is a concept that only really protects sovereign leaders. A “just” war may help to free a group of people from tyranny, but it can also cause more problems for the oppressed peoples, such as the destruction of their homes. The rulers declaring war may be safe, but those sent to fight the war certainly aren’t.

The Guarani people may be have been residents of a sovereign territory, but the sovereign rulers gain nothing by allowing them to live freely.

In two hours and five minutes, director Roland Joffe uses a single event in history to demonstrate the hypocrisy lurking behind the freedom of sovereignty, and the ease with which sovereign rulers can bend this idea to their own agenda, with virtually no repercussions.