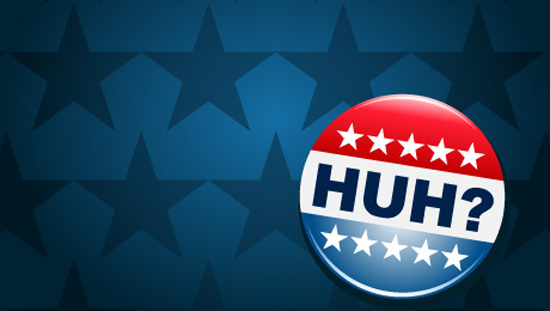 Earlier today, a friend from the days when we lived back in Connecticut posted something on social media and asked me what I thought about it.

It was a link to a story about Mike Rowe, of Dirty Jobs fame, who takes issue with his fellow celebrities for encouraging everyone to vote, regardless of how informed or uninformed those voters happen to be. Here’s part of Rowe’s argument:

Regardless of their political agenda, my celebrity pals are fundamentally mistaken about our ‘civic duty’ to vote. There is simply no such thing. Voting is a right, not a duty, and not a moral obligation. Like all rights, the right to vote comes with some responsibilities, but let’s face it – the bar is not set very high. If you believe aliens from another planet walk among us, you are welcome at the polls. If you believe the world is flat, and the moon landing was completely staged, you are invited to cast a ballot. Astrologists, racists, ghost-hunters, sexists, and people who rely upon a Magic 8 Ball to determine their daily wardrobe are all allowed to participate. In fact … they’re encouraged.

I fundamentally disagree with Rowe’s initial point. I believe that voting is not just a right, but in fact is a responsibility that we have as citizens of a democratic society. And while I would argue that a  principled non-vote is in fact a valid form of democratic participation, that’s not what Rowe’s driving at.

Read the quote again. His objection is that the bar to participation is set too low. Too many of the people who are being encouraged to vote are, in his estimate, so fundamentally uninformed or deluded that they shouldn’t be allowed anywhere near the ballot box:

The undeniable reality is this: our right to vote does not require any understanding of current events, or any awareness of how our government works. So, when a celebrity reminds the country that ‘everybody’s vote counts,’ they are absolutely correct. But when they tell us that ‘everybody in the country should get out there and vote,’ regardless of what they think or believe, I gotta wonder what they’re smoking.

I can’t personally encourage everyone in the country to run out and vote. I wouldn’t do it, even if I thought it would benefit my personal choice. Because the truth is, the country doesn’t need voters who have to be cajoled, enticed, or persuaded to cast a ballot. We need voters who wish to participate in the process.

For Mike Rowe, that seems to equate with wanting to be informed. But not just informed, informed the right way. That’s where my real problem with his perspective lies.

So if you really want me to say something political, how about this – read more. Spend a few hours every week studying American history, human nature, and economic theory. … Develop a worldview that you can articulate as well as defend. Test your theory with people who disagree with you. Debate. Argue. Adjust your philosophy as necessary. Then, when the next election comes around, cast a vote for the candidate whose worldview seems most in line with your own.

Or, don’t. None of the freedoms spelled out in our Constitution were put there so people could cast uninformed ballots out of some misplaced sense of civic duty brought on by a celebrity guilt-trip. … Remember – there’s nothing virtuous or patriotic about voting just for the sake of voting.

There’s a slippery slope in Rowe’s argument that has to be acknowledged. Requiring that voters be informed enough to participate in the electoral process smacks of competency tests. It brings up the ugly history of “literacy tests” like this one, that for generations were used to bar blacks and some poor whites from voting.

But wait a minute, you say (as another friend did in the comment thread on the original post), where is Mike Rowe calling for an explicit competency test? He doesn’t.

He doesn’t explicitly call for a competency test. But it is implicit in his argument. It is not a big leap to go from arguing that uninformed people should not be encouraged to vote to requiring that people demonstrate that they are informed so that they can vote. Mike Rowe did not go there. But others surely would. Our own recent history shows us this is true. That’s the slippery slope we have to avoid.

Another friend agreed. Both with Mike Rowe and with me:

Our politics, our campaigns, our election, has become about optics, emotions, and almost anything BUT the issues, because it seems like either people don’t care, or people are easily distracted by the sideshows. But immediately after thinking that we need to make sure voters are more informed, I cringed at myself because I thought of the same slippery slope that could lead to. It doesn’t sound like a far leap between encouraging people to read up on the issues to making sure they CAN read, or making sure they can pass an IQ test in order to understand issues, right?

And then she took the conversation an important step further:

Here’s my question that I keep coming back to in this election: what do we DO about it??? So many problems, but what do we DO?

I’ve found that a lot of my peers that ARE knowledgeable about candidates and the issues impacting this election are either the MOST die hard extremists because they see what’s at stake or they are the ones that are the most apathetic because they’re frustrated with the current state of things. In all honesty, how do we encourage more knowledgeable voters when people get so discouraged by the whole process!?

If you post too many things on Facebook about the election, people cut you out of your newsfeed. Friends take politics off the table. It takes a certain type of person to be able to discuss politics, either in person or on the Internet without devolving into emotional arguments and name calling and we all know, no one is going to be learning anything in that environment. So, seriously… How can someone my age, who either has friends that agree with me politically, or have probably already hidden me or blocked me on FB, talk about the process and spread knowledge, when people don’t want to receive it?

Here’s what I told her: I’d say that what we need is real engagement and real involvement. Posting crap on Facebook or Twitter or some other social networking platform is none of those things.

It is easy to sit home and bitch and complain. It is harder to work with others to make our communities and society a better place for everyone.

I think Mike Rowe might agree with me on that.