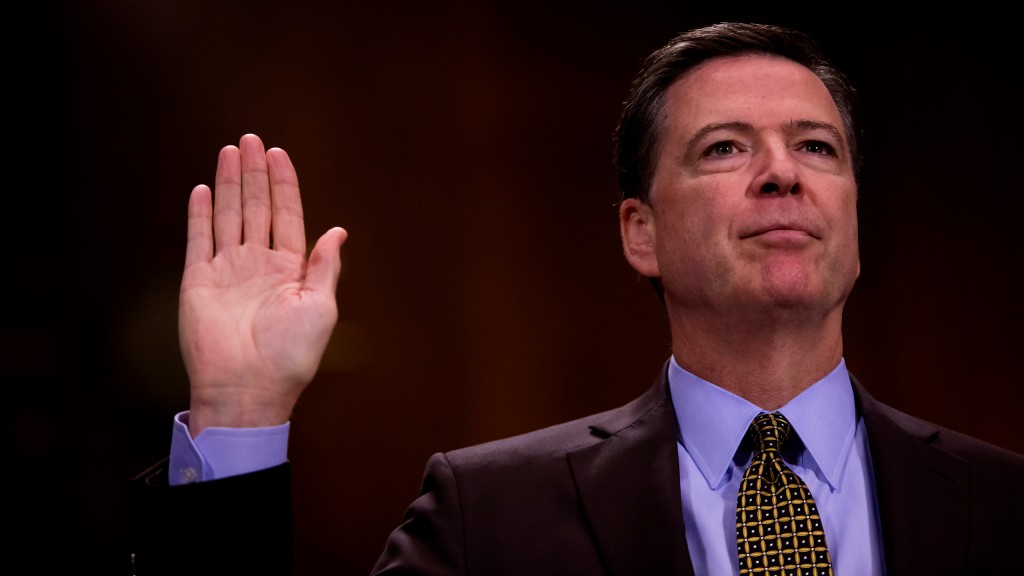 Former FBI Director James Comey’s testimony before the Senate Intelligence Committee begins in a few minutes. Once it starts I will post live updates.

I haven’t tried this before, so it will either be really cool, or a total and complete disaster that I will end up deleting part way through. Check back often and see which it is.

Before it gets started, you can read his opening statement here. Updates will be posted below.

Time for the hearing has expired. Let me try to figure out what I think we’ve learned:

More is sure to come in the days ahead.

12:35 pm — Sen. John McCain (R-AZ) is now asking questions, rather incoherently to be honest, about the FBI’s investigation about Hillary Clinton’s emails. Even Comey is having trouble figuring out just what McCain is getting at. Wow, McCain looks and sounds bad, physically but especially mentally. Which is not exactly what I thought I’d be writing when McCain’s turn came.

12:28 pm — Sen. Jack Reed (D-RI) gets Comey back to the main point: That Comey took Trump’s requests as direction to drop the investigation into former National Security Advisor Michael Flynn. And another critical point gets repeated by Comey: That any investigation of the campaign could naturally come back and touch the candidate on whose behalf that campaign was being conducted. In short, just because Trump was not personally under investigation at the time DID NOT MEAN that he might not be a target of investigation in the future.

12:20 pm — Sen. John Cornyn (R-TX) comes back to an earlier point raised by another Republican. If nothing Trump did slowed down the investigation, what’s the big deal? Oh, I don’t know, maybe something to do with our fundamental norms of justice and the rule of law in a democracy?

12:13 pm — Sen. Kamala Harris (D-CA) asks a series of questions whether anyone connected to Trump campaign tried to hide, encrypt, or destroy evidence of communications with the Russians. Once again, Comey says he can’t answer that in an open setting. But she seems very, very interested in what AG Sessions knew about the Russia investigation both before and after he recused himself.

12:05 pm — But Comey will not say any of this amounts to obstruction of justice by President Trump. “That’s up to Bob Mueller,” the independent counselor.

Meanwhile, Sen. Tom Cotton (R-AK) wants all of the memos Comey wrote about his interactions with Trump turned over to Congress. Comey says sure.

Another bombshell by implication — Cotton: Do you believe Trump colluded with Russia? Comey: That’s a question I don’t think I can answer in open session.

11:58 — Sen. Joe Manchin (D-WVA) asks Comey if the president ever expressed any interest in or curiosity about Russia’s intervention in the election. Answer? Nope, not after the initial briefing.

11:53 — Sen. James Lankford (R-OK) seems to imply that Trump’s “light touch” on the Flynn question is no big deal if it didn’t slow down the FBI’s work. Comey’s take is very different. Points to the “chilling effect” it would have had for his investigators to know that the president had kicked Comey’s direct superiors out of the Oval Office before looking him in the eye and asking him to let the Flynn investigation go.

11:47 — Comey: The Russian ambassador, Kislyak, who met with Flynn, Sessions, and son-in-law-in-chief Jared Kushner, is not himself an intelligence agent. He just knows everything about Russian intelligence operations in the US.

11:42 — Sen. Angus King (I-ME) finally turns the discussion back to Russian meddling instead of Trump, why Comey had a friend leak his Flynn memo. But it doesn’t last. Now asks Comey if he the director had asked for the dinner meeting with Trump, as the president had claimed in a TV interview. Comey says no, the president’s claim is not accurate. Q: Is that an accurate statement? A: “No.”

11:34 — Sen. Roy Blunt (R-MO) — One more Republican getting Comey to AGAIN say that Trump was not personally under investigation. Clearly this is the agreed talking point.

11:24 — In addition to “investigatory interest,” Comey didn’t want to warn the White House.

11:16 — The Sessions point is very, very interesting. Two things: First, Comey can’t talk openly about reasons why the AG had to recuse himself from the Russia investigation. That cannot be good. Is Sessions a target of the independent investigator, or a subject of a counter-intelligence investigation? That later now seems likely. Second point: Comey himself asks a very interesting question — if Sessions had recused himself from Russia-related issues, why was he involved in firing the FBI director?

Sen. Susan Collins (R-ME) now asking the questions. Yet another Republican senator who seems deeply invested in hearing Comey say, one more time, that Trump was not personally under investigation at the time of his firing. Why?

Collins now wants to know why Comey didn’t have someone tell Trump that his questions and requests were out of line and how things are supposed to be done? Comey says, first, we did. But second, because Trump’s requests were of “investigatory interest.”

11:11 — Sen. Ron Wyden (D-OR): Why did you and the rest of the FBI leadership keep Attorney General Jeff Sessions out of the loop? Comey: There were things which I can’t talk  about in open session concerning Sessions and Russia that helped influence the decision. This seems a bombshell to me, but apparently Wyden didn’t notice because there’s no follow up.

11:01 — Sen. Marco Rubio (R-FL) up next. His questioning is a little underwhelming. In earlier hearings Rubio has been focused, probing, and relatively aggressive. I’m struggling to figure out what he’s trying to accomplish this time around.

Seems to be carrying water for Trump, which is frankly surprising. Rubio wants to know why the fact that Trump was not under personal investigation was never leaked given that virtually everything else in this case seems to have. Comey basically shrugs his shoulders.

10:55 — Comey is connecting the dots. Given that Flynn had been fired before, the very next day Trump says he hope’s Comey can let Flynn go. That’s why he took it as direction from the president to drop the investigation. “I’ve seen the tweet about tapes. Lordy I hope there are tapes.”

Asked about what he thought Trump meant when he asked Comey to “lift the cloud” of the Russia investigation, Comey says he viewed that as another plea for Comey to say in public that Trump was not personally under investigation. Comey then discussed that request with his senior leadership team (who were in the room when Trump made the “lift the cloud” call). Says they were as shocked and troubled as he was.

10:47 — Sen. Jim Risch (R-ID) is now up. Asks if, while Comey was director, the president was himself under investigation. Comey confirms that he was not.

Did the president obstruct justice? Risch is trying to get Comey to agree that the president saying that “he hopes” Comey lets Flynn would not amount to obstruction. Comey pushes back — I took it as direction.

Sen. Dianne Feinstein (D-CA) takes over. “Why do you believe you were fired.” Comey: “I take the president at his word” that I was fired over the Russia investigation.

10:41 — Comey says it was “literally true” that Trump was not a personal target of investigation, but that there was disagreement among his team at FBI as to whether he could really say that given that the investigation into the campaign could ultimately touch Trump as the candidate in question.

Comey “knew something was about to happen” when Trump told everyone in the Oval Office to leave so he could talk to Comey privately. Determined to document everything that was said, in unclassified form, so that the truth could be discussed within the FBI and the government. Warner points out that also allows the committee to get those memos as well. They can’t be shielded behind secrecy claims.

10:38 — Comey created the records because he knew he might need to defend himself and the FBI in the future. And this, he reiterates, was due to both the nature of the conversations but because of the character of the individual he was meeting with.

This is remarkable. Comey essentially is calling Trump out for his dishonesty. This is why he kept the records he kept. He read Trump’s character and did not trust him.

10:35 — Vice Chair Warner’s turn. Starts to walk Comey through the meetings with Trump that the former director detailed in his written testimony. Why did you feel you needed to keep a written record? Comey: “I was concerned he might lie about the nature of our meeting.”

10:28 — Burr brings up the Steele dossier (of peeing Russian hooker fame). Comey says he cannot talk about the details of the dossier in open session because it treads on the ongoing investigation.

Comey says he first became aware of Russia-connected cyber intrusion in 2015. “Massive effort” to target multiple US political groups, parties, non-profits, etc. Says he learned data was stolen in late 2015 or early 2016 and that he briefed Obama administration on this. Victims of the hacking and data theft were also informed.

10:25 — Burr begins the questioning. Asks if Comey has any doubts about what Russia did in the 2016 election. Comey: “No doubt.” But Comey says Trump did not ask him to stop the Russia investigation.

Burr: Was Trump trying to obstruct justice? Comey says he will leave it to the special investigator to determine if Trump’s request to “let Flynn go” amount to criminal obstruction.

10:19 — Comey makes brief opening statement; will not reiterate his written remarks, which are in the record. Says the president, after his firing, chose to defame both him and the FBI. “Those were lies, pure and simple.” Wow! Comey calls Trump a liar right out of the box.

10:17 — Warner lays out a case pointing directly to President Trump’s efforts to derail the investigation into Russia. “This is not a witch hunt. This is not fake news.” Comey is sworn in and will testify under oath.

10:08 — Burr in opening statement lays out what he wants Comey to clarify: Exactly what did he think Trump was asking him to do? What was the full nature of Russia’s activities, and the extent of collusion (if any) with it. Notes that this is about an attack not on any particular candidate (Clinton) on behalf of another (Trump), but an attack on American democracy, and that this is of concern to every American, regardless of political party or partisan loyalty.

Vice Chair Mark Warner (D-Va) reiterates that this hearing is not about refighting the election, but about getting to the bottom of Russia’s intervention in the 2016 presidential election. “What the Russians did and why they were so successful,” so that we can prevent this from happening again. States emphatically that we cannot allow “anyone” to prevent the truth to come out. I take that to mean the president specifically.

Warner then recounts White House denials of any  contacts between Trump campaign figures, Trump associates, Trump appointees and Russian officials or surrogates. And accuses Trump of appearing to co-opt or persuade the director of the FBI from investigating these links. “Think about it: the President of the United States asking an FBI director to drop an investigation.” After Comey’s refusal “he was fired.”

10:04 a.m. — Comey enters the chamber and takes his seat at the witness table. Chair Sen. Richard Burr (R-NC) welcomes him. Closed session will follow at 1 p.m. Burr asks members to refrain from asking questions about classified matters until then.