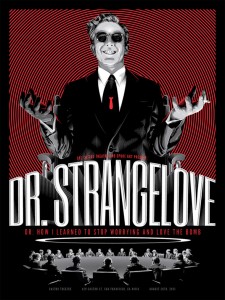 Note — This post is by Myles Zilinsky, a freshman in the Honors College at Oakland University studying in the School of Business. Students in my course, International Relations on Film, are  contributing posts to the blog reflecting on the movies we are watching in class and the ideas those films are helping us to think about. Myles’ piece is presented here with minor editing.

Dr. Strangelove, the 1964 political satire film directed by Stanley Kubrick, plays on the numerous fears and anxieties that came with the Cold War standoff between the nuclear-armed powers of the United States and the Soviet Union.

After an opening scene showing the balletic refueling of an American B-52 bomber midflight, the film proceeds into U.S. Air Force Gen. Jack D. Ripper’s office where he orders a “limited” nuclear strike on their Soviet adversaries. Although many question Gen. Ripper’s principal intentions in ordering this opening nuclear strike, one is only left with his thoughts of a “shoot first, ask questions later” attitude on relations with Soviet officials.

Through the numerous instances of irony and subtle jokes, from dubious character names to puzzling movie props, Dr. Strangelove largely depicts the common misperceptions the Americans and Soviets had of each other and of the strategic environment during this time of nuclear tension.

To begin, the Americans, portrayed by the paranoid Gen. Ripper, believed they lived in a strategic world in which offensive military capability reigned, where a nuclear first strike would not only surprise an adversary, but be so devastating that effective retaliation would be impossible. But in the film, this world they perceived actually would turn out to be the complete opposite, as unbeknownst to the Americans before their attack, the Soviets had implemented an ultimate, yet undisclosed deterrent to an impending foreign nuclear strike: The Doomsday Machine.

As Russian Ambassador de Sadeski details the aspects of The Doomsday Machine to American officials in the War Room, he states that any nuclear bomb that penetrates the soil of the Motherland triggers it. Once triggered, the linked bombs destroy all life on Earth, leaving behind a radioactive shroud that would last 93 years. What made it the perfect deterrent is that The Doomsday Machine was completely automated. It could be neither deactivated nor countermanded. Any nuclear attack, whether first-strike or retaliatory second-strike, would lead to the extermination of everyone.

In addition to showcasing the countries’ misperceptions about one another on apparent attacks and strategies, Dr. Strangelove depicts the modern nuclear world as one that is far more dangerous than previous times. From the beginning montage of nuclear explosions to the ending scene of The Doomsday Machine going off, Stanley Kubrick shows the disastrously high stakes attached to creating and advancing the technologies and strategies of nuclear warfare.

Furthermore, through his characterization of Gen. Ripper, Kubrick demonstrates the immense dangers the world could face if the wrong people and organizations were in charge of such destructive weapons. Thousands if not millions of people’s lives could be at stake with the push of a button. However, although a nuclear-free world would seem like a more peaceful one given these weapons’ horrid potential, who is to say that international conflicts would go away even if nuclear-armed states gave up their arsenals? And what would necessarily happen if there were ia major conflict between former nuclear-armed countries? Who is to say they would not race back to rebuild and even employ these ultimate weapons?

Although no one knows the exact answers to these difficult questions, the reality is, is that in our current state, the nuclear bomb continues to play a perplexing role in the world of international politics.

Forty years after Dr. Strangelove, states still seek nuclear arms to enhance their military power and increase foreign political influence with that power. Scholars and analysts still suggest that nuclear arms can be a stabilizing force in international politics. But, as we’ve seen with North Korea and Iran, the pursuit and possession of nuclear weapons can also make a country an unwanted outcast, the source of extreme tension and dread in the eyes of others.