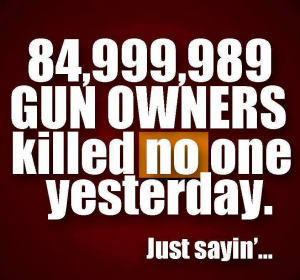 So this showed up in my Facebook feed this morning:

But given what we all know about the prevalence of gun violence in this country, I figured it was bullshit. But who knows? Maybe, just maybe, this simple-minded meme, designed to make gun owners feel better about themselves, was right. Maybe yesterday was different and no one, no one was killed by a firearm anywhere in the United States on Oct. 7, 2015.

So I looked. And I was right. The meme is bullshit.

According to the Gun Violence Archive, which tracks and has a rolling 72-hour update of incident reports involving firearms, there were 39 shootings across the U.S. yesterday which together left seven dead and 20 wounded. Here are each of the killings with links to the incident reports:

So, sure, most of America’s gun owners didn’t kill anyone yesterday. Except for the ones who killed those seven.