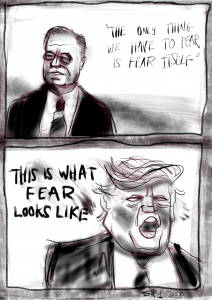 A former student asked me the other day if we’d be teaching “Trumpism” as a school of thought in some future IR classroom. Here’s what I told him:

I’d hesitate to call this a coherent school of thought. Trump is a throwback to earlier, frankly discredited, approaches to international politics and economics.

He’s a mercantilist in economics and a very unsophisticated realist in his approach to military power and diplomacy. He is illiberal in what had been a liberal era.

He’s far more dangerous than the neocons ever were, not only for his views, but for his erratic personality, his notorious vanity and narcissism, and dangerously thin skin. He is simultaneously easily manipulated and easily enraged.

The last time I was genuinely afraid of what an American president could do was when Reagan was first elected as a virulent and aggressive anti-Soviet crusader. Thankfully those fears were unfounded.

We can only hope that will be the case with Trump.