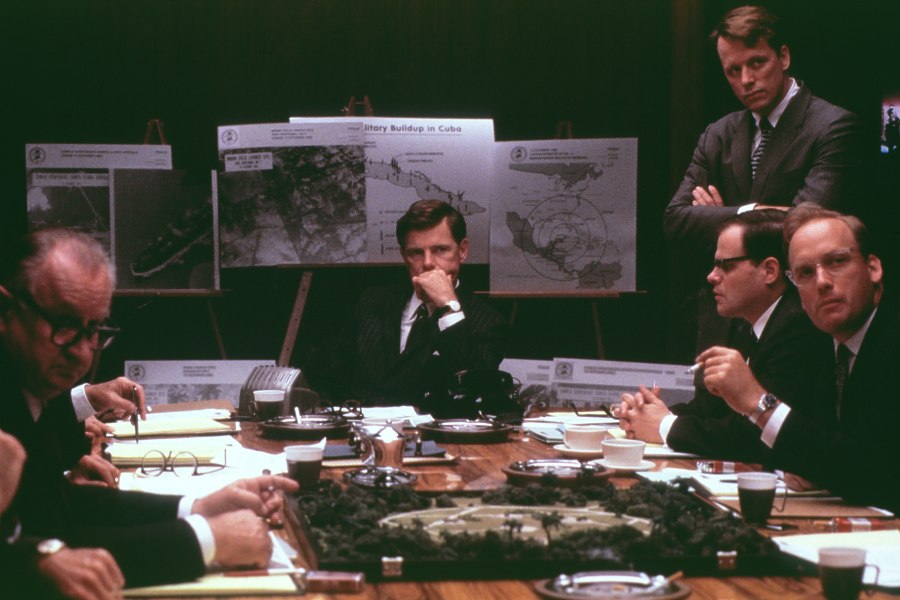 Note — This post is by a student in the Honors College at Oakland University. Students in my course, International Relations on Film, are  contributing posts to the blog reflecting on the movies we are watching in class and the ideas those films are helping us to think about. This entry is presented here with minor editing.

Do we negotiate, or do we strike? This was the fundamental question which the Kennedy Administration needed to answer during the Cuban Missile Crisis, dramatized in Roger Donaldson’s 2000 film Thirteen Days. The movie demonstrates how policy-makers come to decisions in crisis mode.

“All right sir, let me ask you one simple question. Do you, Ambassador Zorin, deny that the U.S.S.R has placed and is placing medium and intermediate range missiles and sites in Cuba? Yes or no? Don’t wait for the translation: yes or no?”

It’s rather nauseating at others, watching cabinet level-officials explain to the president that the only permissible option is to go to war, as if it were beyond their cognitive abilities to think of potential alternatives.

Scholars continue to examine the Cuban Missile Crisis for lessons to be learned about foreign policy. Graham Allison, a professor at Harvard, surmised three “conceptual lenses” to analyze the Cuban Missile Crisis (and other foreign policy crises) with. The first is that of a “rational actor.” It models statesmen as acting rationally, so that they make the best decision possible given the options they are confronted with. In particular, it supposes that high-level policy-makers are apolitical, free to support the most rational option. While most citizens would certainly hope this to be the case, they would likely offer a more cynical view – that policymakers act in their own best political interest, as opposed to the national interest.

Second, we consider Allison’s “organizational process” lens. This models foreign policy decisions as a function of the competition between somewhat stove-piped organizations, and the procedures and regulations which “bind” each of them.

This is a prominent feature of the depiction in Thirteen Days. Kennedy’s national security team is initially bent on the idea of forceful military intervention. He’s presented with three options: a “surgical airstrike against the missiles themselves,”a larger air strike against their air defenses along with the missiles,” and/or an invasion. At this point, given his team’s push toward hardline military options, Kennedy says that he’s certain he will order the airstrikes.

One of the subsequent scenes depicts his two closest advisors, Attorney General and brother Robert F. Kennedy and Special Assistant Kenneth O’Donnell (as depicted in the movie), telling him that conducting airstrikes would be an emotional rather than rational response to the situation. It shows Kennedy’s realization that the recommendation from the military men comes from their military organizational process, and that he must rationally keep all options open. It demonstrates a shift, in practice, from an organizational process model to a rational actor model. Note that the three options he was presented with did not include the naval blockade, which was actually implemented.

Allison’s third model is what many citizens might imagine is the case, especially as the political environment becomes increasingly polarized. The “governmental politics” model, also known as “bureaucratic politics,” envisions policymakers as maneuvering and compromising in order to achieve their own personal goals and policy preferences. The idea of a rational foreign policy and rational actors to dispense it is exchanged for a foreign policy defined by the bargaining of the top advisors’ ideological predilections.

Thirteen Days could be viewed through the lens of a bureaucratic politics model at times, though it often fits much better as an intersection of the organizational process and rational actor models. For example, the scene described earlier, where organizational processes seemed to give way to rational actors could alternatively be viewed through the lens of bureaucratic politics. Kennedy’s reluctance to accept Gen. Carter’s position on airstrikes,“it’s obvious. It’s the only option,” and also former Secretary of State Dean Acheson’s, “the General is right. There is only one responsible choice here,” could be viewed as pitting his personal policy preferences against the security team’s’ preferences, in contrast to modeling his position as one of a rational actor.

Thirteen Days shows the making of foreign policy decisions through the viewpoint of a bureaucracy. If Kennedy simply followed the organizational processes which his advisors were beholden to, the Cuban Missile Crisis would have likely ended in a very different way. We cannot say for certain that Kennedy was free from his own office’s organizational processes, intragovernmental politics, or that he was a rational actor. We can say that the choice of a naval blockade does seem better than the alternatives of war offered by most of his advisors.