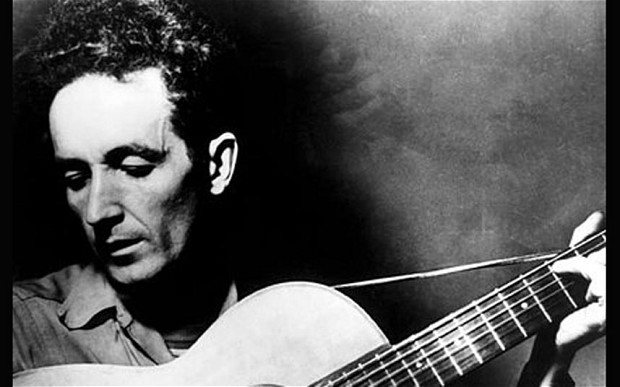 I never cease to be amazed at the prescience and timeliness of some artists. Take Woody Guthrie who in the 1940s recorded “Mean Talking Blues.”

With lines like, “I hate everybody don’t think like me, and I’d rather see you dead than I’d ever see you free,” or “Rather see you starved to death than see you at work,” the lyrics could have been written yesterday:

I’m the meanest man that ever had a brain,
All I scatter is aches and pains.
I’m carbolic acid, and a poison face,
And I stand flat-footed in favor of crime and disgrace.
If I ever done a good deed — I’m sorry of it.

I’m mean in the East, mean in the West,
Mean to the people that I like the best.
I go around a-causin’ lot of accidents,
And I push folks down, and I cause train wrecks.
I’m a big disaster — just goin’ somewhere’s to happen.
I’m an organized famine — studyin’ now I can be a little bit meaner.
I’m still a whole lot too good to suit myself — just mean…

I ride around on the subway trains,
Laughin’ at the tight shoes dealin’ you pain.
And I laugh when the car shakes from side to side,
I laugh my loudest when other people cry.
Can’t help it — I was born good, I guess,
Just like you or anybody else —
But then I… just turned off mean..

Well, I hurt when I see you gettin’ ‘long so well,
I’d ten times rather see you in the fires of hell.
I can’t stand to fixed… see you there all fixed up in that house so nice,
I’d rather keep you in that rotten hole, with the bugs and the lice,
And the roaches, and the termites,
And the sand fleas, and the tater bugs,
And the grub worms, and the stingarees,
And the tarantulas, and the spiders, childs of the earth,
The ticks and the blow-flies —
These is all of my little angels
That go ’round helpin’ me do the best parts of my meanness.
And mosquiters…

Well, I used to be a pretty fair organized feller,
Till I turned a scab and then I turned off yeller,
Fought ev’ry union with teeth and toenail,
And I sprouted a six-inch stinger right in the middle of the tail,
And I growed horns…
And then I cut ’em off, I wanted to fool you.
I hated union ever’where,
‘Cause God likes unions
And I hate God!