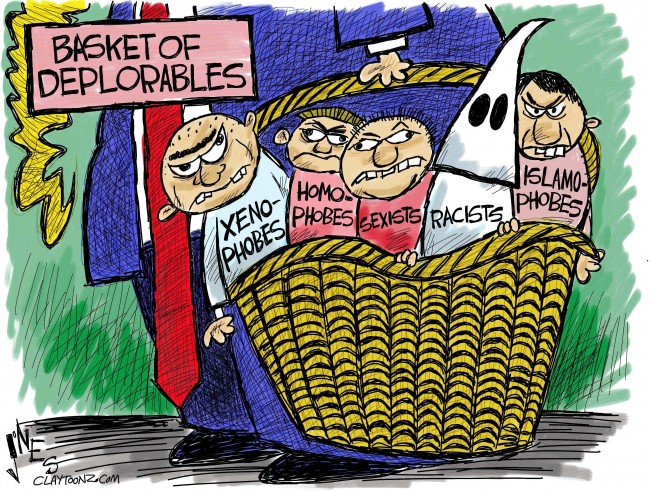 Vox has produced what looks to me like the definitive summary of the contents of the “basket of deporables” that constitutes Trump’s support for the White House. To summarize, Clinton is right. Here are the details as compiled by Vox.

On Islamophobic attitudes, Clinton may underestimate the breadth of animus for Muslims among Trump backers.

We do know, based on an analysis by Jonathan Roswell at Gallup, that Trump backers are more likely to live in areas that are farther from Mexico and have smaller Mexican populations. That suggests Trump supporters are generally people who live in native, white communities and may, perhaps, fear those communities are changing.

This is why a Trump surrogate warned that if Clinton wins the election, there will be “taco trucks every corner.” The worry isn’t that delicious food will be everywhere, but that the cultural makeup of America will dramatically change if the country maintains policies that are friendlier to immigration — and it will change to a culture that Trump regularly describes, as he did at the launch of his campaign, as dangerous and criminal.

This complicates Clinton’s claim that up to half of Trump supporters are “xenophobic.” They aren’t in the sense that they don’t seem to mind a French immigrant, even an undocumented one. But many are potentially xenophobic in the sense that they fear Mexican — and perhaps other Latino — immigrants, because of the cultural impact that may have on America.

A poll from March and April by Reuters and Ipsos took a close look at this issue. It found that Trump supporters are more likely to say that, compared to white people, black people are viewed by Trump supporters as less intelligent, more lazy, more rude, more violent, and more criminal. About 40 to 50 percent of Trump supporters held at least one of these views, while fewer than 35 percent of Clinton supporters did.

This doesn’t mean that a majority or even half, as Clinton suggested, of Trump supporters are racist. But these views are much more prominent among the Republican nominee’s supporters than those who back the Democrat in the presidential race.

So on the core of Clinton’s charge that half of her opponent’s supporters fall into a “basket of deplorables” based upon their Islamophobic, xenophobic, and racist views, when we look at the data we see she’s mostly right. Sure, that leaves plenty of Republicans and conservatives who are supporting Trump because they believe they have no other choice. He is their nominee after all.

And understandably, these folks resent being associated with the other contents of the basket. Fair enough.

But you can also tell a lot about someone by the company they keep. This is Trump’s company. Republicans should just own it.