There were many, many revealing moments in Bernie Sanders’ recent long interview with the editorial board of the New York Daily News. Here’s one.

In arguing that “bad trade deals” have been responsible for the decline of the American working class, Sanders revealed what he thinks a fair trade deal would look like:

So if you are in Vietnam, where the minimum wage is 65¢ an hour, or you’re in Malaysia, where many of the workers are indentured servants because their passports are taken away when they come into this country and are working in slave-like conditions, no, I’m not going to have American workers “competing” against you under those conditions. So you have to have standards. And what fair trade means to say that it is fair. It is roughly equivalent to the wages and environmental standards in the United States.  (Emphasis added.)

Let that sink in for a minute. Sanders is claiming, in the name of fair trade, that the US should only trade with countries where wages are on par with what American workers earn. Leaving aside the issue of environmental standards, and assuming that Sanders is only talking about the current minimum wage, such a policy would eliminate trade with all but America’s richest trading partners, those where the minimum wage is $5 to $7 an hour or higher.

To see what countries would be excluded, have a look at this map showing global minimum wage levels: 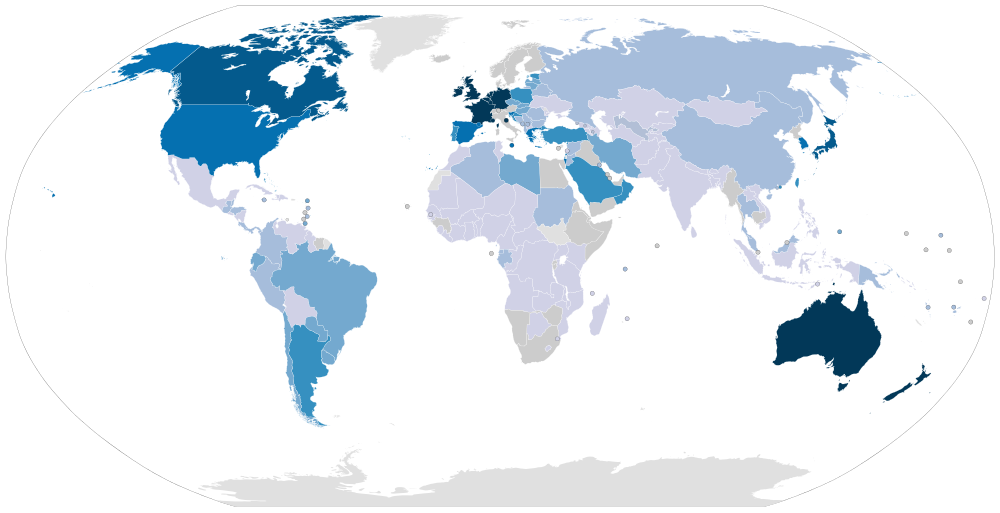 The countries with the three darkest shades of blue are those which meet Sanders’ wage standards. Everyone else would be cut off. That’s all of Latin America, Africa, and Asia with the exceptions of South Korea and Japan.

Would this bring manufacturing jobs back to the United States, as Sanders promises? Maybe, though I have my doubts. But the effects on the developing world, and the world’s poorest of the poor, would, as Zack Beauchamp explains over at Vox, be absolutely devastating:

But there’s one big problem, according to development economists I spoke to: Limiting trade with low-wage countries as severely as Sanders wants to would hurt the very poorest people on Earth. A lot.

Free trade is one of the best tools we have for fighting extreme poverty. If Sanders wins, and is serious about implementing his trade agenda as outlined in the NYDN interview and elsewhere, he will impoverish millions of already-poor people.

What’s worse is that the specific ways Sanders has proposed to roll back previous trade agreements could lead to serious reprisals from the affected countries. The nightmare scenario, experts say, is a global slide toward protectionism, wherein China and other countries take cues from the US and impose their own retaliatory tariffs. That would devastate economies in the developing world, dooming many more millions to a lifetime of crushing poverty.

Look, I don’t think Sanders is so callous that he is knowingly condemning millions upon millions of foreign workers to the kind of extreme poverty-induced misery that Americans, even those at the economic bottom, haven’t experienced in generations. I suspect he hasn’t really thought about it. That’s the real issue here.

I do think this is evidence of a much larger problem with Sanders as a candidate, and more importantly, as a possible president. He has never had to confront the practical implications or manage the negative impacts of his putting his high-minded principles into practice.

Bernie Sanders has spent the last 30 years of his career as a professional political gadfly. That’s a great place to be when believe you have truth and righteousness on your side.

It’s bad enough not to have given much hard thought about how to translate your principles into policy. But its worse, and fundamentally irresponsible, to not have considered the consequences of actually succeeding.