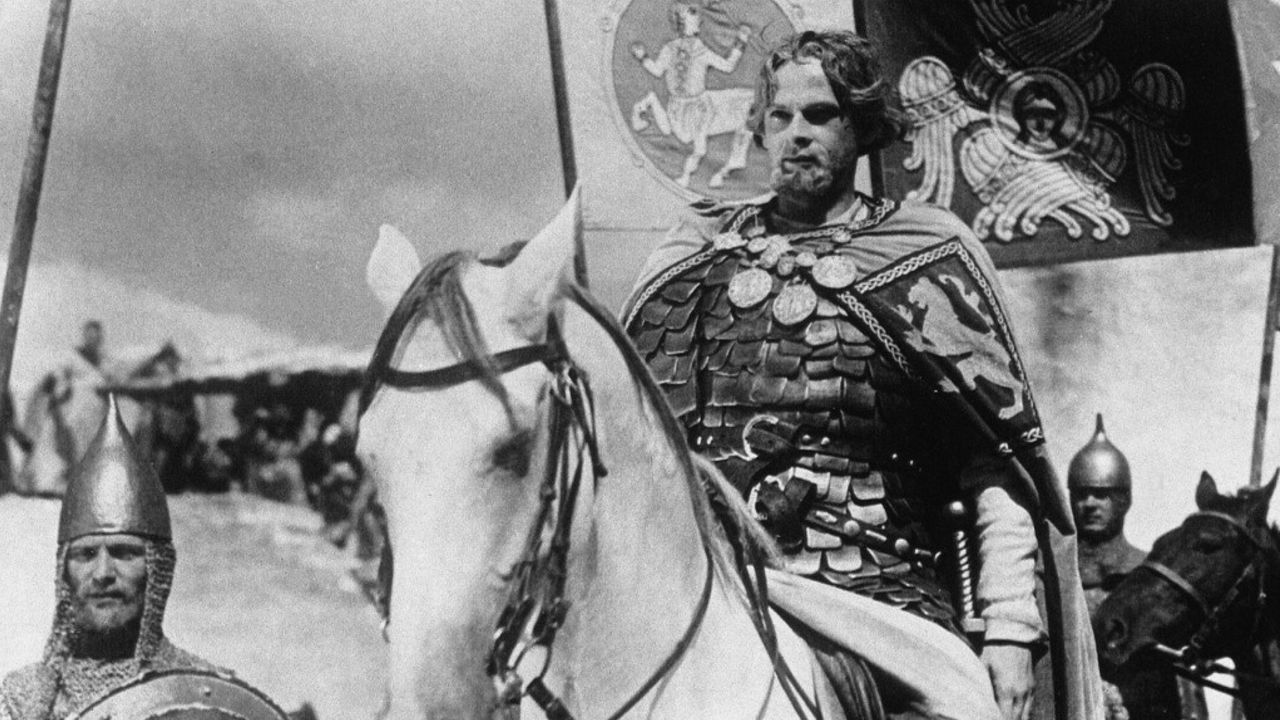 Note — This post is by Jonathon Dillon, a junior in the Honors College at Oakland University majoring in Bioengineering. Students in my course, International Relations on Film, are  contributing posts to the blog reflecting on the movies we are watching in class and the ideas those films are helping us to think about. Jonathon’s piece is presented here with minor editing.

The 1938 Russian film Alexander Nevsky is movie about the Russian people fighting off a 13th century invasion. But it is also more than that. Famed director Sergei Eisenstein made Nevsky specifically as a propaganda film at a time when relations between the Soviet Union and Nazi Germany were strained.

In making this film, Eisenstein aimed to bring the Russia people together in hopes of inspiring them to defend their homeland in the face of a looming threat of German aggression.

To do this, Eisenstein brings us back to the story of Alexander Nevsky, Prince of Novgorod, who achieved legendary status for his victories over Swedish invaders. In Eisenstein’s telling, having defeated the Swedes, Nevsky withdrew from public life to live simply as a fisherman along side his personal guard.

When he gets word that German crusaders have invaded Russia, sacking its cities and slaughtering its people, he rises back to action in defense of the motherland. He travels to the city of Novgorod and rallies its citizens, motivating them to pick up their swords and fight off the German invaders.

Eisenstein chose this story because it was familiar, believable, and inspirational, but still flexible enough to be reinterpreted by the storyteller. In short, the Nevsky saga is what the British sociologist and scholar of nationalism Anthony Smith calls a “usable past,” one which can be repackaged and delivered to the audience in a way that will resonate with them, as Eisenstein did with Alexander Nevsky and the Soviet people.

Usable pasts can play a large role in politics, especially in the strategies of elites seeking to unite or mobilize the masses. For example, a politician can use memories of the past to help his campaign, telling the people that they need to “make our country great again.”

Or a leader may make reference to a past “golden age,” a period where the nation had achieved its greatest heights of accomplishment, whether philosophical, economic, or military, in order to inspire his country to try to reclaim its lost heritage.

In the case of Alexander Nevsky, Eisenstein looks back to a golden age of Russian military victory and national unity, reminding the Soviet people of the strength they had shown and the glory that they could reclaim.

In using this piece of history, Eisenstein also takes advantage of national myths shared by with the Russian people.

Myths play a central role in politics, argues Hungarian scholar György Schöpflin. Eisenstein understood this, and used it to his advantage when writing Alexander Nevsky, referencing Russian myths of military valor. Such myths focus on the strength of the military and battles fought and  won in the past.

The film represents this by focusing on a strong military hero and Russian victory in battle. In the final speech of the movie, having decisively routed the German invaders, Nevsky tells the people that he will one day return if Russia is in trouble, and vows to smite whoever fails to fight for their country in the future.

These words from Nevsky are used to inspire the Soviets to fight for their country in their effort against Nazi Germany. This is not the only myth that Eisenstein uses in his film, however.

Another myth which features prominently in the film is the myth of ethnogenesis and antiquity. This encompasses a belief that those who first inhabited a place have foremost rights to the territory, a direct connection between the people and the land itself. Eisenstein plays to that several times in the film.

For example, a song played in the background of the film tells of the people’s blood soaked into the soil of Russia, showing that the people of the nation and the land are connected by blood, and that the people will shed their blood in order to defend it.

This is given strong visual representation in the scenes of Nevsky gathering his army to meet the Germans. We see peasants climbing out of dugouts in the ground, and while we understand they have built their homes underground, the visual conveys the idea that the people are literally born from the land they must fight for.

This again sends the message to the people that they are one with the motherland, and must rise to  defend it. The myths in this film provide a framework for a common identity of the Russian people, inspiring them and reminding them why they must be ready to fight for their country.

The film Alexander Nevsky is most notably a propaganda piece intended to rally the Russian people to fight for their homeland, and its filmmaker, Sergei Eisenstein, made that fact quite obvious. It is hard to deny that it is a great example of how usable pasts and myths are used in international politics.