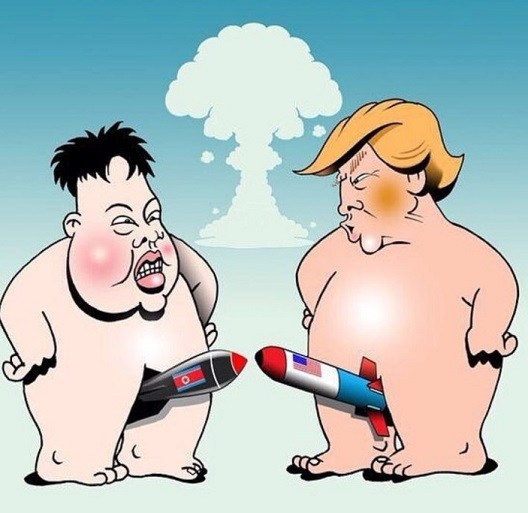 Somehow, you knew it was eventually going to come to this:

North Korean Leader Kim Jong Un just stated that the “Nuclear Button is on his desk at all times.” Will someone from his depleted and food starved regime please inform him that I too have a Nuclear Button, but it is a much bigger & more powerful one than his, and my Button works!

At one level you can, and probably should, dismiss this as more silly posturing and insecure boasting on the part of President Trump. That said, in absolute terms he’s right: the US nuclear arsenal is bigger and more powerful than not just North Korea’s, but pretty much everyone else’s as well. And as I said on the radio this morning, the logic of nuclear deterrence is still operable and neither side seems irrational enough, at least not yet, to purposely initiate a nuclear exchange.

But that doesn’t mean all is well either. As Axios reports this morning, there is fear within Trump’s own administration that the president could blunder into war accidentally:

What they’re saying: “Every war in history was an accident,” said one administration insider. “You just don’t know what’s going to send him over the edge.”

Last year ended with all kinds of dire warnings and predictions of the odds of war (including nuclear war) between the US and North Korea. But to close this post on an optimistic note, North Korea today reactivated the border hotline with South Korea, restoring a direct line of communication between the two governments and gesturing toward a possible thaw in relations.