President Trump, in a 45-minute conference call with the nation’s governors today, told them how to handle the waves of protests, some violent, that have swept more than 50 cities across the country over the last several days and nights:

Six minutes into the call, after recounting scenes he apparently saw on television, and then passing along to the governors rumors his friends have told him, Trump, who spent part of Friday night cowering in the White House bunker while protesters rallied outside, returned to his main theme:

There’s no retribution. So I say that, and the word is dominated. If you don’t dominate your city and your state, they’re going to walk away with you. And we’re doing it in Washington and DC. And we’re going to do something that people haven’t seen before, but you’re going to have total domination.

Before turning it over for questions, Trump again berated the governors for he called their “weakness,” and their failure to call up even more than the 17,000 National Guard troops already deployed in 29 states to confront these disturbances.

I don’t know what it is, politically, when you don’t want to call up people. They’re ready, willing, and able. They want to fight for the country. I don’t know what it is. Someday you’ll have to explain it to me, but it takes so long to call them up. We’re waiting for you. We’re shocked at certain areas. L.A., we’re shocked that you’re not using the greatest resource you can use, and they’re trained for this stuff, and they’re incredible, but you’re not calling them up. I don’t know, but you’re making a mistake because you’re making yourself look like fools.

And some have done a great job. A lot of you. It’s not good. It’s very bad for our country. Other countries watch this. They’re watching us and they say, “Boy, they’re really a pushover.” And we can’t be a pushover. And you have all the resources. It’s not like you don’t have the resources. So I don’t know what you’re doing.

For Trump, strength means putting soldiers on the streets of American cities, to dominate fellow Americans into silence and acquiescence.

But this is far from the first time we have heard Trump speak this way, disparaging those who fail to meet popular dissent with maximum force and praising those who crush protest with cold ruthlessness. In fact, I wrote about it right after election day in 2016:

Read that again. “Put it down with strength.” That’s what the Chinese did in 1989, and thousands died. And that’s what Trump is telling America’s governors to do in 2020. Dominate.

President Trump wants occupying armies on American streets, and he doesn’t understand why America’s governors balk at the idea. This exchange, between Minnesota Gov. Tim Walz and Trump, lays it bare:

Tim Walz: (24:21)
If I’m still on, the one thing I would say, I spent 24 years in the guard. So one thing I would say is you could do is, a lot of people don’t understand what the National Guard is. And you need to get out there from a PR perspective and make sure that it’s not seen as an occupying force, but it’s their neighbors, school teachers, business owners, those types of things. That’s a really effective message.

Donald Trump: (24:39)
Okay, good. I think that’s a good idea. I must say, it got so bad a few nights ago, that the people wouldn’t have minded an occupying force. I wish we had an occupying force in that. But for some reason, I don’t know what it is, governors don’t like calling up the guard. 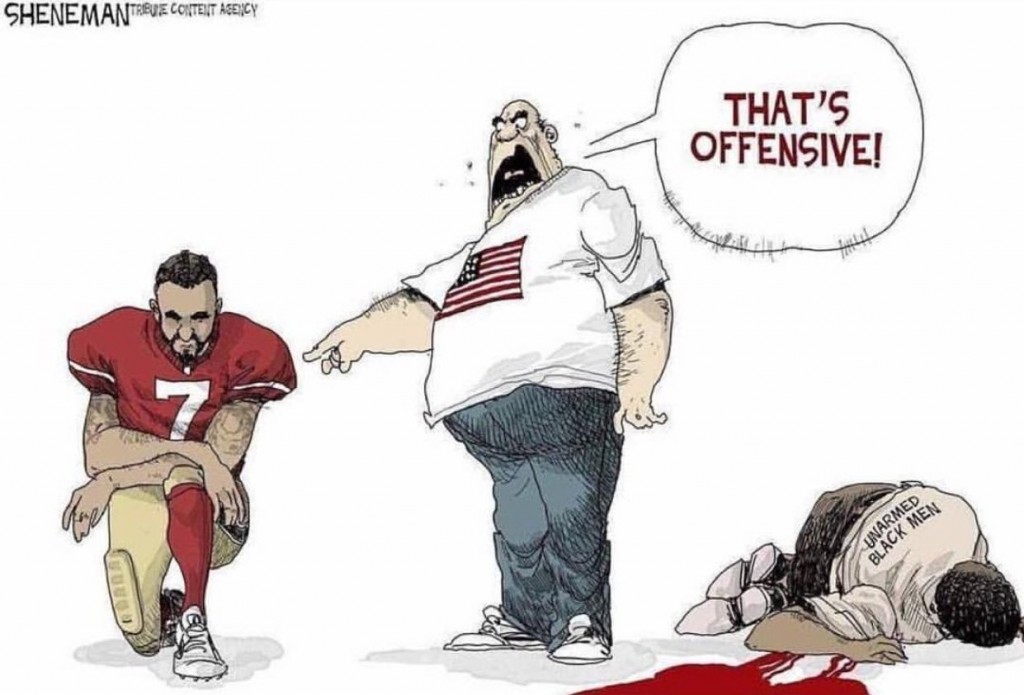 This “debate” we’re having about NFL players taking a knee during the playing of the national anthem, has nothing to do with the anthem, or loyalty to the flag, or honoring our veterans, or our active-duty military.

It’s about protesting racial injustice, and specifically the rash of killings of unarmed African Americans by police under circumstances that are more than a little dubious.

But what if it were about the anthem, or the flag, or the military? I’d still take a knee, and support the right of anyone else to do likewise. Because, as an American, I’m not loyal to any of those things.

Back in January, when president-elect Donald Trump was said to be imposing personal loyalty tests on those who sought jobs in his administration, and those who were planning to protest Trump’s inauguration were denounced as disloyal to the office of the presidency, I wrote about what I was, and was not, loyal to.

Here’s some of what I had to say back then:

I meant what I said in January, and I mean it today, nearly 10 months later. If we’re not loyal to our values and ideals, why be loyal to the symbols we claim they represent?

As anti-Trump protests continued for second night in cities across the country, we should recall the president-elect’s past praise for the Tiananmen Square massacre in when the Chinese government slaughtered hundreds of student pro-democracy demonstrators on the night of June 3-4, 1989.

In one of the early Republican debates all the way back in March, Trump defended his Playboy comments:

I was not endorsing it,” Mr. Trump said. “I said that is a strong, powerful government that put it down with strength. And then they kept down the riot.

As the New York Times pointed out the next day, Trump’s use of the word “riot” to describe the pro-democracy protests was exactly the same characterization the Chinese government used in justifying their use of lethal force to quell the demonstrations.

After January we will get to see how a Trump presidency will respond to peaceful opposition to his policies and resistance to the forces of hate and bigotry his election has unleashed.

The paranoid, self-pitying, and defensive reaction he posted to Twitter last night does not inspire confidence.

Just had a very open and successful presidential election. Now professional protesters, incited by the media, are protesting. Very unfair!