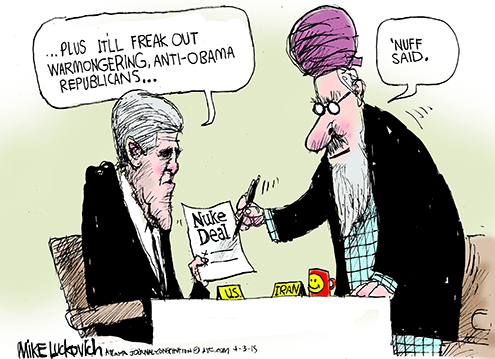 With four more Senate Democrats announcing their support for the Iran nuclear deal yesterday, Republicans will not have the 60 votes needed to overcome a filibuster of their resolution disapproving the agreement.  Not that objections from Congress would have made much of a difference in any course:

For all the drama leading up to this week’s debate, the other five world powers who helped negotiate the agreement — Britain, China, France, Germany and Russia — have made clear they have no desire to return to the bargaining table, and are likely to ease sanctions against Iran and put the agreement in place regardless of the view ultimately expressed by Congress.

Of course none of this stops the political posturing either in Congress (not that the lack of congressional GOP buy-in for any of Obama’s foreign policy initiatives really matters much) or from amongst the ranks of presidential contenders.

Luckily Dick Cheney has resurfaced to offer a fresh alternative to diplomacy, a new Mideast war, backed up by a master class in how not to learn from the past.

“[T]here are lessons from the past on which we can draw,” Cheney declared. He then cited Israel’s 1981 attack on Iraq’s Osirak nuclear reactor; the Gulf War, in which the U.S. destroyed Saddam Hussein’s nuclear program; the 2003 invasion of Iraq, which Cheney said convinced Libya to abandon its nuclear program; and Israel’s 2007 attack on a nuclear reactor in Syria. “In each of these cases,” Cheney argued, “it was either military action or the credible threat of military action that persuaded these rogue regimes to abandon their weapons programs. Iran will not be convinced to abandon its program peacefully unless it knows it will face military action if it refuses to do so.”

Of course Cheney fails to articulate how to make threats of military action — like the ones Obama has already made — any more credible without actually going to war. Nor does he manage to explain how such threats failed to stop the Iranians from advancing to the edge of nuclear capability under his watch.

Perhaps he’ll show up at the rally today to spell it all out for us slow learners.

We may never find out if those 42 Senate Democrats really support the deal now that conservative Republicans in the House have blocked a vote in that chamber. Reuters reports this afternoon:

A rebellion by conservative Republicans in the House of Representatives on Wednesday delayed the first congressional vote on the nuclear agreement with Iran and raised the possibility that lawmakers might never vote on a resolution disapproving of the pact.

The House was supposed to vote on a procedural motion to begin debate on Wednesday, but it was put off after some Republicans said they wanted to push President Barack Obama to provide more information about the deal.

The rebel Republicans, led by Representative Peter Roskam, said the Obama administration had not provided all the information about the deal required under the IranNuclear Review Act. They said it includes “secret side deals” about inspections of Iran’s nuclear facilities that have not been fully revealed.

The White House dismissed that suggestion.

“If Congress does not vote, this agreement goes into effect. It’s as simple as that,” White House spokesman Eric Schultz said.

For the life of me I can’t figure out what the Republican game is here. 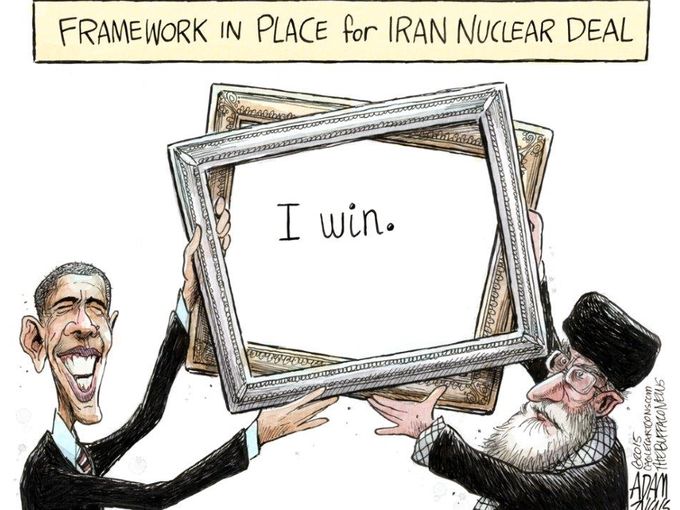 This morning Sen. Barbara Mikulski (D-Maryland) announced that she will support the agreement reached with Iran curtailing it’s development of nuclear weapons technology.  With 34 votes in hand, Pres. Obama now has enough support to veto any bill coming out of Congress that would reject the deal.

This is being hailed as a major foreign policy win for Obama. At Politico the headline reads: “Obama prevails on Iran deal.” At Slate, the headline is: “The Iran Deal Will Survive. Now It’s Just Politics.” The New York Times has, “Obama Clinches Vote to Secure Iran Nuclear Deal,” while The Atlantic headlines the story with “Obama Seals the Iran Deal.”

By now, if you are one of the two or three people (shout-outs to my wife and my dad) that read my blog with any regularity, you know that I’ve written before about my support for the agreement with Iran first here and more recently here.  I don’t want to rehash any of that now, but I do want to say a few words related to the cartoon above.

It’s pretty simple: If you want an agreement to stick, if you want the parties to abide by the commitments they’ve made, it is far better for them to walk away from the table thinking they have won than for one or the other to believe that they’ve been taken to the cleaners.

Parties that walk away from the table thinking they’ve won do so with the implicit understanding that the deal satisfies their interests. And a deal that satisfies your interests is a deal that you will hold to. This is a deal you won’t try to subvert or undermine.  As I tell my students when I teach negotiation and bargaining, the win-win outcome is the holy grail of settlements.  These are the agreements that persist and deliver on their promise.

If we’re lucky, that’s the kind of deal that’s been made with Iran.

Scott Walker was down in South Carolina last week to give a major speech on foreign policy, an area in which his credentials have been questioned. To be fair, this is nothing new. After all, what governor can claim any real meaningful expertise when it comes to foreign relations?

Ok, besides Sarah Palin and that view of Russia from her front porch. Or G.W. Bush with all that Mexico right next door.

Anyway, while Walker’s speech before an audience of cadets at the Citadel (all members of the military academy’s Republican Society, by the way) was a little light on actual policy specifics, he did deploy the rhetorical heavy artillery:

America will not be intimidated. And neither will I.

Are we safer now than we were seven years ago? Anyone who believes the answer to that question is yes should vote for former Secretary of State Hillary Clinton

Sadly, I believe the answer is no, America is not safer. Since Secretary Clinton took charge of our nation’s diplomacy, we’ve abandoned American leadership in the world, forgotten that America is an exceptional country, and lost faith in America’s ability to influence world events.

Stirring words for sure. But it turns out that the version of the speech that Walker, famous for speaking without the aid of a teleprompter, delivered was very different from the prepared draft of his remarks. As luck would have it, I came across the original text.

So, in the interests of no-retreat, won’t-be-intimidated, world-influencing, exceptional leadership, I want to share with you the original. Conveniently set to music …

They figure out the Iran deal is pretty darn good.

Something interesting has happened the past few weeks. Many lawmakers have read the 159-page deal, known as the “Joint Comprehensive Plan of Action,” signed by Iran and the P5+1 nations (the United States, Great Britain, France, Russia, China, and Germany). Many more have been briefed on the deal’s fine points by the American negotiators and technical specialists, as well as by Western ambassadors. And many of them—those who aren’t bound by GOP discipline or constituents’ pressure (and even a few who are)—have concluded that this is a good deal.

And it also appears that Israeli Prime Minister Benjamin Netanyahu and his faithful lobbyists in AIPAC have badly overplayed what was at best a weak hand by so ferociously and publicly trying to kill the agreement in Congress. While the final cards haven’t yet been played, it looks more and more like Obama has held on to sufficient support among Senate Democrats to prevent the deal being blocked.

Kaplan’s piece is an excellent overview both of the politics, and of the details of the agreement itself. If you’ve followed the issue at all it is worth your time to read.  And Netanyahu and AIPAC may want to keep in mind this sage wisdom: