Three weeks ago, on Easter Sunday, suicide bombers attacked three churches in Sri Lanka in coordinated acts of terrorism. More than 250 people were killed and some 500 injured.

Two days later, ISIS claimed responsibility, though it remains unclear just how involved in the plot the organization really was. The Sri Lankan government had detailed advance warning of the plot and failed to act to prevent them.

Closer to home, in early April a series of arson attacks targeted African American churches across a rural parish of Louisiana. A suspect, the 21-year-old son of a deputy sheriff, was charged with hate crimes in the incidents.

Later that month, a 19-year-old member of an evangelical Christian church entered a synagogue outside San Diego and opened fire, killing one and wounding three others. In a manifesto he posted online, the suspect rooted his actions in biblical justification, belief in his own salvation, and a narrative that blames Jews for Jesus’ crucifixion. He has been charged with federal hate crime and civil rights violations.

All of these incidents, as well as the mass shooting at mosques in New Zealand in March, got me wondering how frequently American places of worship are the targets of terrorist attacks, and what those incidents might tell us about the nature of terrorism in the United States. All of the data I am going to discuss below comes from the Global Terrorism Database maintained at the University of Maryland. 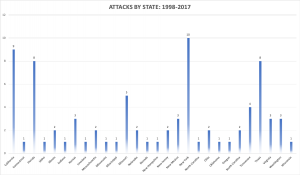 As the chart here shows, attacks occurred in 28 states, with the highest number recorded in New York (10) followed by California (9), Florida (8), and Texas (8). The others in the dataset come in with five or fewer separate attacks. More noteworthy, however, are the kinds of places of worship that are targeted. 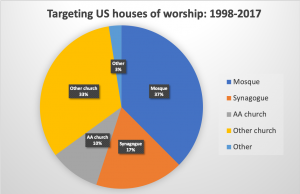 The most commonly targeted places of worship are not churches but mosques, accounting for 37 percent of all incidents during this 20-year period. Synagogues account for 17 percent of targets, and African American churches another 10 percent. Other churches account for 33 percent of cases. Others (Sikh and Hindu temples) make up the final three percent.

What does this tell us? That two-thirds of all terrorist attacks targeting places of worship are directed against religious or racial minorities.

Attacks on these minority places of worship have also been the deadliest. In 2012, six people were killed at a Sikh temple in Oak Creek, WI, a case I’ve written about before. In 2014, three were killed in shootings at a Jewish community center and retirement home in Overland Park, KS. In 2015, nine were killed at an African American church in Charleston, S.C. In 2016, two were killed in a shooting targeting an imam in New York City.

When the data is updated through 2018 we will be able to add the killing of 11 worshippers at a synagogue in Pittsburgh to this awful list.

Only two other fatal attacks on places of worship were recorded between 1998 and 2017. In 2008, two were killed in a shooting at a Unitarian Universalist church in Knoxville, TN, by perpetrators targeted the congregation because of its liberal social and political positions. And in 2017, one person was killed and eight wounded in a shooting at a church in Antioch, TN. There was no specific motive behind this attack.

Of the 80 attacks over the 20-year period covered here, only two were the work of Muslim extremists or jihadi-inspired perpetrators. No one was killed or injured in either incident.

What all these attacks suggest is that in the United States, terrorism targeting places of worship is consistent with the standard truth about American terrorism that I have been writing about since almost the beginning of this blog. Most of it is perpetrated by white nationalist or racist extremists on the far right of the political spectrum.

And thus a familiar pattern gets that much more familiar.