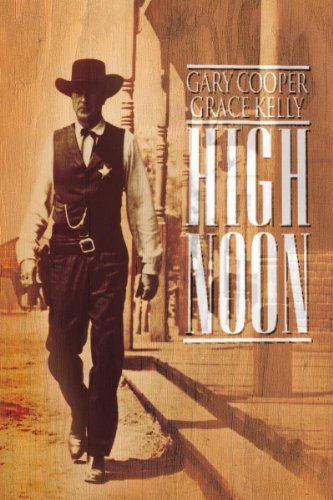 I have been teaching American foreign policy for a long time now, and for as long as I can remember I have shown my students the classic Western film High Noon as a way to give them insight into the enduring beliefs about ourselves and the nature of the world around us that animate our conduct of foreign policy.

I originally wrote the comments below as background for my students to give them some context when they watch the film (I’ll be showing it in class today and Friday). But I’ve also been thinking about it in relation to the discussion of foreign policy that has emerged in the current presidential campaign.

As most of the Republicans (Rand Paul the notable exception) seeking the White House have argued over and over again, the world is a dangerous place with enemies that America must confront head-on, with force, lest everything we stand for fall to ruin. America is all that stands between global order and global chaos. We lead not because we desire power, we lead because we must, because no one else will, because no one else is capable.

Lindsay Graham, while an afterthought in the polls, is representative of this perspective, one shared with most of his GOP rivals, with Democratic front-runner Hillary Clinton (though her rhetoric while bellicose is far less apocalyptic), and even with the much maligned (by Republicans) President Obama. Speaking at the Aspen Ideas Festival in July on the threat of ISIS and his plans to militarily intervene in Iraq and Syria to defeat extremism and stabilize the Middle East, Graham said:

President Obama, speaking at West Point in 2014, while stated in more measured terms, expressed the very same sentiments about America’s role in the world:

[I]t is America that the world looks to for help. The United States is the one indispensable nation. That has been true for the century passed, and will likely be true for the century to come. .. The question we face … is not whether America will lead, but how we will lead, not just to secure our peace and prosperity, but also to extend peace and prosperity around the globe.

What follows are the comments I originally wrote for my students:

High Noon (1952) is both a product of its times, the early years of the Cold War, as well as a reflection of our enduring collective political values and beliefs. In other words, High Noon tells us much about how Americans see themselves, and how we saw (and I would argue) continue to see America’s role in the international arena. When you watch this film I think it will come as no surprise that High Noon has been screened in the White House more often than any other movie.

The metaphors in the film operate in two ways. First, the character of Will Kane (Gary Cooper) serves as a metaphor for the post-WWII United States. Kane is the archetypal Western hero evidencing the best qualities of the American character: courage, steadfastness, and devotion to justice.

Some of the background details of the film serve to underscore these embedded values. For example, in the pivotal church scene, the congregation is singing this verse from “The Battle Hymn of the Republic”:

He has sounded forth the trumpet that shall never call retreat; / He is sifting out the hearts of men before His judgment-seat: / Oh, be swift, my soul, to answer Him! be jubilant, my feet! / Our God is marching on.

This implies a divine mission to set affairs aright, a mission that men of courage will meet. By failing to act, the townspeople condemn themselves in the sight of the Almighty, an idea made clear in the piece of scripture, Malachi 4:1, that the pastor reads, which evokes similar visions of both righteousness and judgment:

For, behold, the day cometh, that shall burn as an oven; and all the proud, yea, and all that do wickedly, shall be stubble: and the day that cometh shall burn them up, saith the

LORD of hosts, that it shall leave them neither root nor branch.

The setup for the story is that Kane, having cleaned up Hadleyville after a long struggle, is hanging up his gun and badge and retiring. This can be seen as the film’s equivalent of the American victory in World War II. After a brief time of peace and quiet, the bad guys – the Frank Miller gang – return to Hadleyville and once again threaten the peace. Here the film equates the threat of communism with the fascist tyranny of the war years.

The central question is how Kane and the townsfolk, and metaphorically the United States and the rest of the world, will respond to this new threat.