It was a relatively quiet week on the global terrorism front, so let me start this week’s look back by drawing to your attention a fascinating article posted at The Atlantic this morning profiling Abu Abdullah al-Muhajir, an Egyptian who was killed in Syria three weeks ago in an air strike carried out the United States.

Muhajir, a veteran of the Afghan jihad 1980s, is credited with developing the theological justifications for the extreme violence that would later characterize ISIS and other groups. At the time of his death he had broken with ISIS and thrown in with Jahabat Fateh al-Sham, formerly known as the al-Nusra Front, fighting against both his one-time allies and the Assad regime in northern Syria.

As the article, penned by reporters Charlie Winter and Abdullah K. al-Saud, puts it:

While there is a striking paucity of open-source information about him, the Egyptian national, a veteran of the Afghan jihad and long-time al-Qaeda associate, had a massive impact upon the development of jihadist thought in the last four decades. Indeed, it’s hard to overstate his importance in the context of modern Islamist terrorism—neither the Islamic State nor al-Qaeda would be where they are today without him.

The profile highlights Muhajir’s role as the “theological brains” behind the ultraviolence that characterized the emergence of AQI, al-Qaeda in Iraq, the precursor group to the Islamic State:

Ranging from ruminations on the merits of beheading, torturing, or burning prisoners to thoughts on assassination, siege warfare, and the use of biological weapons, Muhajir’s intellectual legacy will remain a crucial component of the literary corpus of ISIS—and, indeed, whatever comes after it—as a way to render practically anything permissible, provided, that is, it can be spun as beneficial to the jihad.

The full article is well worth your time if you are interested in understanding how religiously motivated terrorist groups justify the extreme levels of violence they characteristically exhibit. Here’s the link to the article again. Now on to this week’s list. 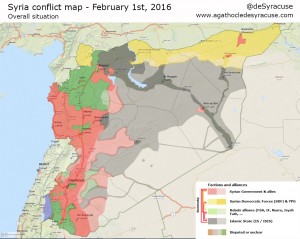 The announcement early today that an agreement has been reached to deliver humanitarian aid to besieged Syrian cities, to be followed by a “cessation of hostilities” within seven days, is obviously a welcome development in a civil war that has dragged on since 2011.

With nearly a half million killed, and some 45 percent of the country’s population driven from their homes, according to a report from the Syrian Center for Policy Research, this is a humanitarian disaster to rank with the worst of them.  But there are all kinds of reasons to doubt that the agreement announced today will deliver much, if any, of what it promises.

For one thing, too much remains unresolved. Like the future role of Syrian President Bashar Assad or whether all of the groups fighting against the Syrian regime should be considered terrorists or a legitimate opposition. Russia and the United States, architects of the deal hammered out in Munich (Oh the irony!), disagree on both points. Putin wants Assad to stay in power, Obama wants him gone. The US backs several moderate anti-Assad groups, Russia bombs them all.

Crucially, none of the groups fighting on the ground, not the Syrian government nor any of the rebels, have signed on to the agreement. They weren’t even involved in drafting it. That was the work of the Americans and Russians with backing from the UN and European Union.

Assuming the combatants do sign on, the cessation – not a ceasefire which would be more permanent – would not go into effect for another week, giving the Syrian military, backed by Russian airpower, plenty of time to extend and solidify their recent gains around the strategic city of Aleppo, the putative capital of the opposition which may well fall to the regime. In the meantime, the bombs continue to fall.

Finally, the sheer complexity of the constellation of groups fighting the war, and their mixed and conflicting motives and objectives, will make it exceedingly difficult, if not impossible, for any negotiated settlement to satisfy them all. Even without Immortan Joe or Danish biker gangs added to the mix.

That brings us right back to victory on the battlefield as the only thing likely to  bring the Syrian war to an end. And if that’s the case, given realities on the ground, the end will come at the rebels’ expense, leaving Assad in power and Russia reinvigorated as a player on the global stage.

To get a flavor of the some of the people who will probably end up on the wrong side of any settlement which leaves Assad in power, take half an hour out of your day and watch the short film below by Brooklyn-based photographer Joseph Lawrence. 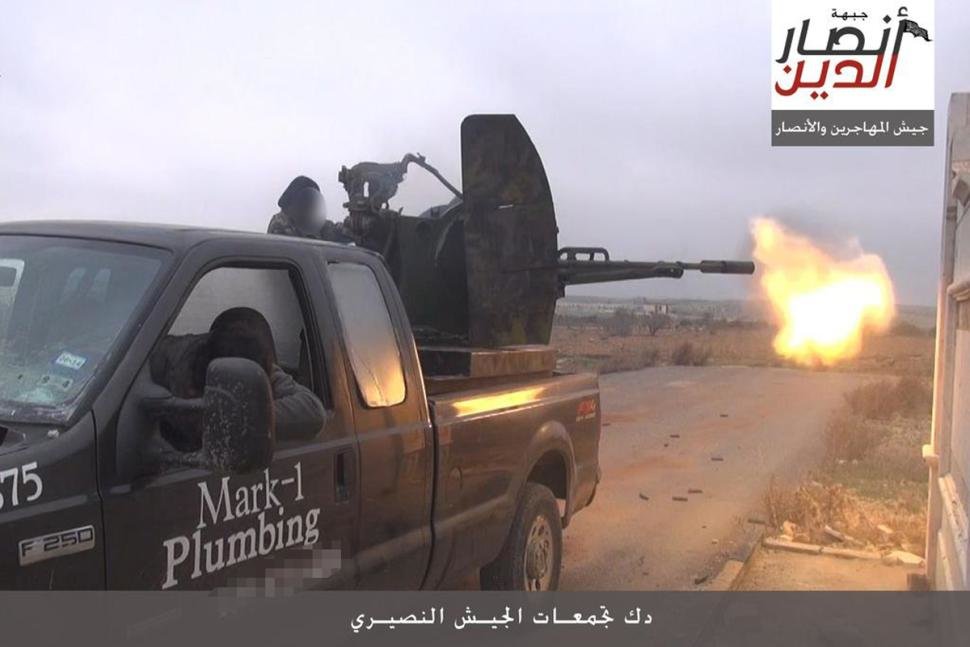 A Texas plumber is suing a Houston car dealership after the Ford F-250 he traded in wound up on the Syrian battlefield as a jihadi war wagon. According to The New York Times, which was given a copy of the lawsuit:

After images of the truck appeared online, the plumber, Mark Oberholtzer of Galveston County, claims he lost business and received hundreds of threats that accused him of being a terrorist sympathizer. Mr. Oberholtzer is seeking more than $1 million in damages. …

According to the lawsuit, the dealer sold the truck at auction in November 2013, and it was exported from Houston to Mersin, Turkey, the following month.

From Turkey, it apparently made its way to Syria and wound up being adapted to carry an anti-aircraft gun in its flatbed manned by jihadi fighters.

Apparently, when ISIS commands the market for Toyotas, other jihadi groups have to settle for what they can get.