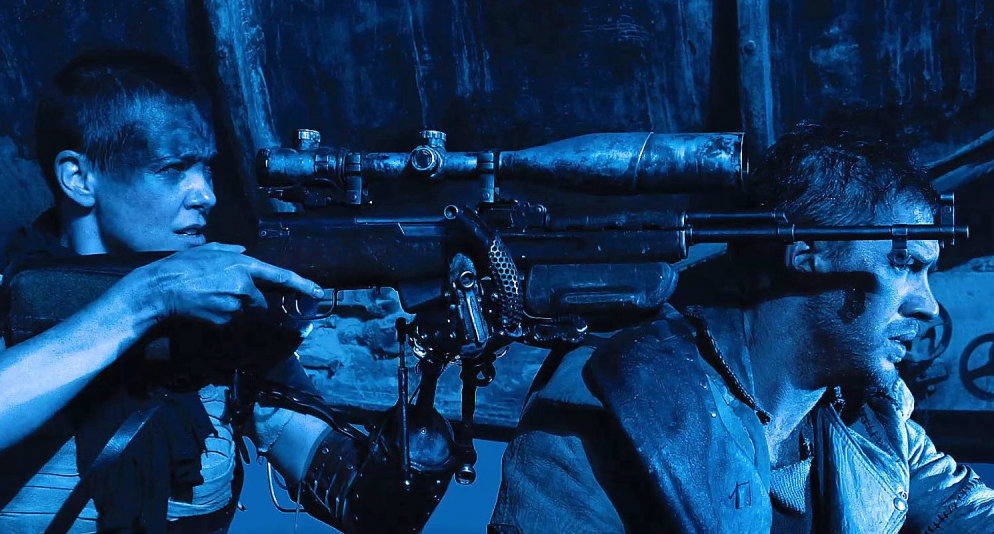 Note — This post is by Benjamin Walthers, a freshman in the Honors College at Oakland University majoring in English and Secondary Education. Over the course of this semester, students in my course, International Relations on Film, contributed posts to the blog reflecting on the movies watched in class and the ideas those films helped us to think about. Benjamin’s piece, the last in this series, is presented here with minor editing.

Mad Max: Fury Road depicts a world transformed into a state of dystopian survival. But hidden under the façade of a high-octane action movie is a social critique on the true nature of humanity.

On the surface, the film focuses on Max Rockatansky (Tom Hardy) and Imperator Furiosa (Charlize Theron), two survivors struggling in their way to mend their broken world. These two heroes fight against the creatively grotesque, if not pretentious, armies of Gas Town, the Bullet Farm, and the Citadel.

Through intense action scenes and cinematic explosions, gunfights, and car tricks, the duo fight almost relentlessly in order to capture the Citadel and restart the world. Beneath the expectedly over-the-top action scenes and clichéd story lies a harsh criticism about human instinct in a dystopian world.

The film opens with a brief history explaining what happened to the world to make it virtually uninhabitable. The exposition is presented in a form of old news reports containing words such as: “The water wars” and “The oil wars.” Without fully revealing the history, the dialogue alludes to the idea that humanity, in times of limited resources, fought over the water and oil.

Fueled by greed, humanity itself is what caused the collapse into a dystopian future in which whoever owns the resources possesses the power.

From the beginning of the film to the end, one idea is represented: In a time of anarchy, humanity devolves to its primal state and acts on basic instincts of self-interest or preservation. Outside of the three main outposts of “civilization” left — Citadel, Gas Town, the Bullet Farm — there is no security offered. It becomes the individual’s responsibility to protect itself against any threat.

When Max first encounters Furiosa, his immediate instinct is to threaten her. Shortly after his threat, a fight ensues between Max, Furiosa, and the wives that she had stolen from Immortan Joe, ruler of the Citadel.

At the end of the fight, Max is able to steal the war rig Furiosa was driving, leaving her and the wives in the desert vulnerable to a vengeful, pursuing Immortan Joe. Max acted with cruel indifference, but, in this world, he did the right thing, serving his own interests. Stealing the truck meant increased chances of survival and the ability to outrun Joe. That’s what mattered.

In this world even cooperation is done out of selfish necessity. The three outposts in the film are shown connected to each other through trade. Without no other explanation for their cooperation, it can be assumed from the film that a forced dependence has been established. Citadel has water and food; Gas Town and Bullet Farm have commodities corresponding to their names.

Subtle reminders of the dying nature of the world are scattered visually throughout the movie. Most notable are the depictions of the characters; some are attached to medical devices, some are sickly pale, and others are covered in malformations.

Stuck in an unforgiving world, the towns have no choice but to trade to gain needed resources. Therefore, cooperation with one another in different ways must be maintained.

Even Furiosa’s actions of saving the wives from Joe is a result of self-interest. Near the end of the film, Max asks Furiosa why she is choosing to help the wives and incur the wrath of Joe. Furiosa replies that perhaps she’s looking for redemption. This explanation foreshadows Max’s final decision to help take over the Citadel.

With a satchel full of seeds from her dying matriarchal tribe, the Vuvalini, Furiosa and the brides plot to use the water in the Citadel to regrow the world.

Throughout the movie, Max is afflicted by visions of a young girl he had failed to save in the past. From this, it can be extrapolated that perhaps, like Furiosa, Max is looking to repent. When presented with a seed symbolizing birth, life, and growth, Max understands that he has the opportunity to aid in the regrowth of his dead world.

By saving the world, Max could finally redeem himself.

In an anarchic dystopia, humanity devolves to a primordial state of self. Actions are dictated by selfish needs. Max and Furiosa’s self-interest allowed for survival and, regardless of motives, the overtaking of the Citadel where they could plant a new seed and begin a new world.

Mad Max: Fury Road shows that, in the fall of civilization, so long as survival is maintained, hope is not lost.

Other posts in this series can be found by following the links below.

The Battle of Algiers